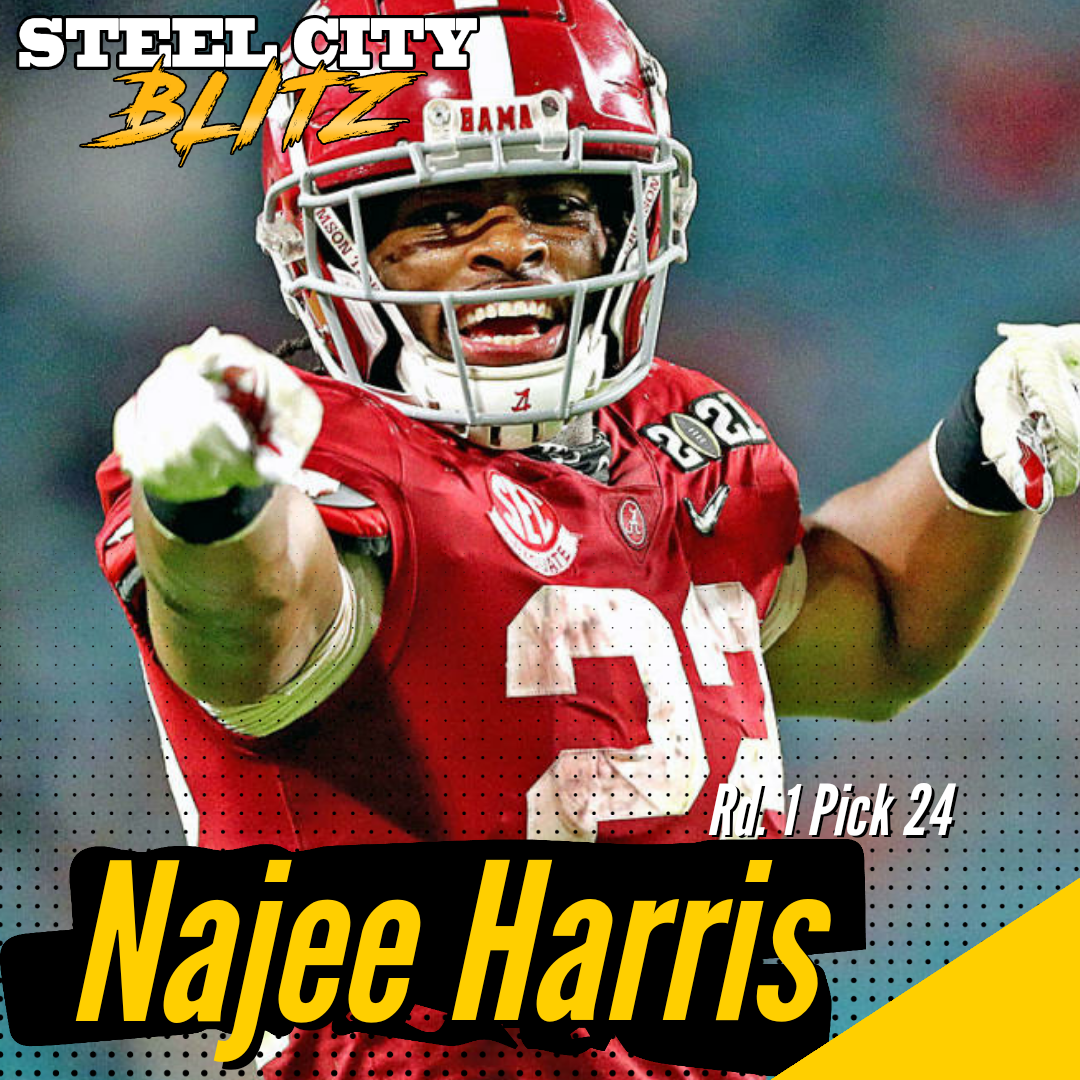 After much anticipation, the Steelers selected Alabama Running Back Najee Harris with their first round pick in the 2021 NFL Draft. Harris was tied to the Steelers throughout the pre-draft process with Kevin Colbert and Mike Tomlin attending his Pro Day at Alabama. Even though Harris didn’t do the traditional athletic testing during his Pro Day, his abilities on tape jump off the charts and he is certainly the best all-around running back in the draft class. Najee Harris absolutely fits the Pittsburgh Steelers mold as a powerful, physical runner that can go over, around and through defenders. He will be a great fit in the Steelers offensive attack as they look to improve upon the league’s worst rushing offense and take some pressure off of Ben Roethlisberger.

Harris is the top running back in the draft class. He has the footwork and short-area quickness to make guys miss, along with the raw power to run through arm tackles. As an under-rated part of his game, Harris might also be the best third-down back in the class with his ability to both run routes as well as pick up the blitz. The only thing lacking is the breakaway speed to turn long runs into touchdowns, but he is also a player who seems to get stronger as the game goes on and the defense wears down.

There is plenty to like about Najee Harris’ game. He has excellent footwork and explosiveness. He can make quick cuts in the hole and is surprisingly shifty for a player of his size. He does not have the long speed of a burner but can grind out yards in big chunks. He has the power and lower-body strength as shown by his hurdling over defenders and continual churning of his legs and ability to fall forward for additional yardage and carry defenders with him through arm tackles. Harris also might be the best all-around receiving back in the draft. He is a sharp route-runner with good hands and is not a player that defensive backs want to face one-on-one in the open field. Harris is also one of the best blocking backs in the draft and can pick up blitzers in pass protection schemes, enabling him to step in immediately as a three-down back. On top of all that, he is a great teammate and has done some great work in the community.

Whatever team drafts Alabama's Najee Harris is getting a special person. Today he threw a draft party for kids at the homeless shelter where he lived for several years growing up. He told me it was emotional the first time he went back to visit. @kron4news #NFLDraft #RollTide pic.twitter.com/JadBIFh4pd

To be honest, the only thing lacking in Harris’ game is the long speed of running away from defenders down the field. While the Steelers will likely have a physical regimen they want Harris to use to get into “NFL shape,” there isn’t much in his all-around game that needs to be improved. Harris has very good vision to find the hole and the burst to hit it with speed and power.

How He Fits With the Steeler

Harris is immediately the starting running back and will be a workhorse in the backfield. He is by far the best back in the room and can be a three-down back. The Steelers had reportedly been looking to move towards a zone blocking scheme and Harris is definitely a power runner. That said, he has the skillset to succeed in any system and is versed in Alabama’s run-pass-option schemes as well. He can immediately improve the Steelers short-yardage running game which has been lacking for years and should become an immediate fan-favorite. Harris is going to be a beast in the backfield. Our only concern with the pick was the potential long-term durability of Harris who is 23 years old and running backs in the league tend to phase out after 5-ish years. That said, the Steelers should be able to maximize his abilities immediately and we should expect to see Harris toting the rock a LOT this season.

[…] statistics. That forced the organization to draft a running back in the first round of the 2021 NFL Draft. They will now be hoping Najee Harris can help propel them when it comes to running with the […]