The Pittsburgh Steelers did the obvious. They actually picked the guy who it seemed everyone had them taking. How often does that happen?!? The Steelers sprinted to the podium to select Alabama running back Najee Harris with the 24th pick in the 2021 NFL Draft. Harris will immediately vault to the top of the running back depth chart where he becomes Mike Tomlin’s next bell cow. While Harris checked almost every first round box used by Tomlin and GM Kevin Colbert, the one he doesn’t is age. At 23 years old he’s one of the oldest players ever taken under this duo. My feeling on this is simple; you don’t worry about the next contract right now. Yes, running backs don’t last long in the current NFL but let’s worry about that later. For now, the Steelers addressed a huge area of need and most importantly they have a guy who starts now.

There is no question that as we sit here early on Day 2, that the draft broke favorably for Pittsburgh. All of the eligible centers are still available. There are several top tackles still available and there are also a bevy of defenders there too. Ian will have you covered on all of the best available guys.

We were recording as the Steelers made their pick last night. We also looked ahead to the rest of the Draft and had a whole lot of fun as usual. The SCB Steelers Podcast presented by DEK Roofing, Inc.

Tweet of the Day… Harris is a damn good human being too.

The Bengals continue to Bungle. Ja’Marr Chase is a terrific player and I get the connection to Joe Burrow but how do you not find protection for him especially with Sewell and Slater sitting there??? I assume they’ll be looking for OL today too… The Ravens used their two late picks on Minnesota WR Rashod Bateman and Penn State EDGE rusher Jayson Oweh. I’m not sold on either but there is definitely upside with Oweh… Cleveland took Northwestern CB Greg Newsome II who I think is a really solid player. The Browns know they have to have guys who can cover in the AFC North so it fits.

The Draft in General

Get off my lawn! There, I got that out of the way because that’s what this rant will sound like. There is absolutely no reason for the first round to take four hours plus. I’m no fool however, I realize this about television. This is about giving the talking heads time to “do their thing.” What I don’t understand is the need to have Roger Goodell 200 yards from the podium all the time. Keep him closer and let’s get these damn picks announced! The Draft is becoming as drawn out as as an NBA game! 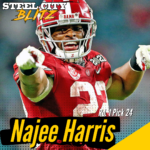 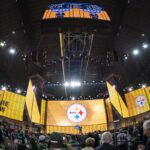