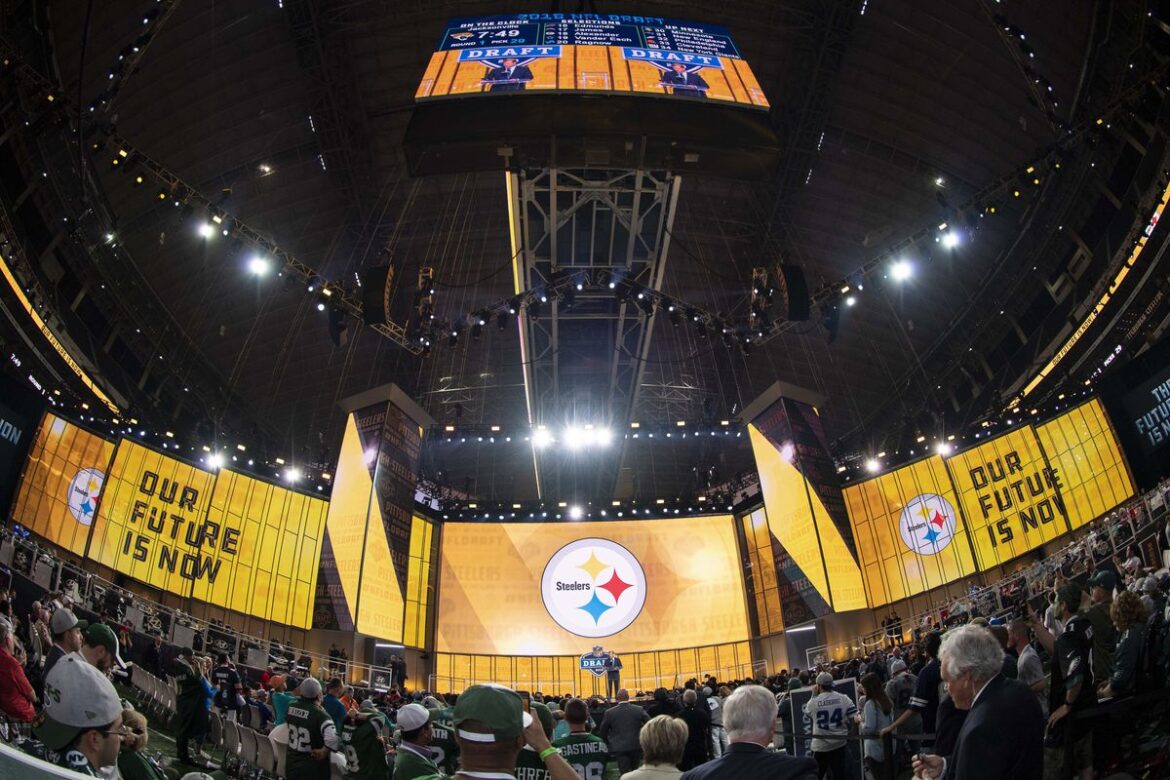 The 2021 NFL Draft kicked off on Thursday Night with the Steelers selecting Alabama RB Najee Harris with the 24th overall pick in the draft. Harris was the top running back in the class and immediately becomes the Steelers starting back. He is very good in the passing game as well and can be a three-down-back in a league where those are a fading breed. The Steelers currently have two selections in the second and third rounds of the Draft, holding the 55th and 87th overall picks. Those are the 23rd picks of the 2nd and 3rd round, respectively. The second round kicks off tonight at 7pm Eastern Time.

With the running back position addressed, the Steelers still have needs for starting-caliber players at tackle, center, and slot cornerback. They also need a #2 tight end along with rotational players at EDGE rusher and inside linebacker. Depth at safety somewhere in the draft should also be considered. The areas of least need are wide receiver and defensive line. With the Steelers finalizing a short-term extension for Mason Rudolph, it seems unlikely they would select another quarterback. Here’s a look at the best players remaining on our draft board for the Steelers, based on their remaining needs.

Top 10 Best Available for the Steelers

The idea of being able to throw two rangy linebackers out in the middle of the field is an enticing prospect and could allow the Steelers to mix and match their defensive coverages as necessary. The issue with JOK is that he is very under-sized for a linebacker (and oversized for a safety). Notre Dame used him as a swiss army knife, lining him up all over the defense. JOK’s speed, athleticism, and playmaking abilities show up on tape and he is certainly a game-changer defensively, he just needs to find the right fit in the NFL.

Jenkins is an absolute mauler with a mean streak and the strength to back it up. He posted an impressive 36 reps on the bench press at his Pro Day. He also has a below-average arm length and wingspan, which could lead some teams to consider moving him inside to guard. That said, he moves very well in space and gets to the second level well where he can demolish defenders.

This class of EDGE rushers does not have the elite talent that prior groups have had. Nevertheless, the NFL is a passing league and pass rushers are still a premium, as displayed by 6 being taken in the first round. The class also has a divide between athleticism and collegiate production. Ojulari tested through-the-roof athletically and wins with incredible burst off the ball. With Bud Dupree moving on to Tennessee, the depth at the EDGE rusher position is very thin, even with Alex Highsmith figuring to step into the starting lineup. Ojulari also dropped into coverage at Georgia, something the Steelers ask their linebackers to do on occasion.

The Steelers did not scout Cosmi heavily, but he is a player we absolutely love. He blew away the testing numbers at Texas’ Pro Day and measured as one of the most athletic offensive linemen in the last 20 years. Cosmi is still a bit raw but plays with a nasty edge. If he can learn the technique to refine his game he could be a perennial Pro Bowler at tackle.

The Steelers have a need at cornerback and also love to tap NFL bloodlines with their draft picks. Samuel’s father had a great career as an off-zone corner with great burst to close on the ball and rack up a number of pick-sixes by undercutting routes. Samuel Jr has a similar athletic skillset and displays perhaps an even better knack for understanding where the ball is going and closing in. Tomlin and Colbert attended Florida State’s Pro Day and Samuel certainly seems to be on their radar. He is a player who could step in and play the slot role immediately then potentially move outside when Joe Haden’s contract expires.

Our top-ranked center is Oklahoma’s Creed Humphrey. Even though this looks like a deep draft for centers, Humphrey shines as the best in the class. He played in a power scheme in college but also tested very well athletically and has the ability to move in space as a zone scheme would require. He also can play any position along the interior of the line and the Steelers have always valued versatility in their linemen.

Campbell is a tall, lanky corner that is at his best on the outside. He has good long speed and can run with receivers down the field and match up with them physically. Campbell has a nastiness in the run game and is willing to fly up from the secondary to make tackles. His change-of-direction is a little lacking but he makes up for it with toughness and physicality.

Freiermuth would fit the exact mold of what the Steelers want in a tight end. Of all the tight ends in this class, his game is the most similar to Heath Miller’s in his all-around abilities for both blocking and receiving. Freiermuth could step in to the #2 tight end role immediately then take over the starting role after Ebron’s contract expires at the end of this season.

Eichenberg is a player that is very solid all around on tape. He doesn’t do anything particularly spectacular but he does everything very well. He is just a solid all-around player who doesn’t make many mistakes and doesn’t get beat very often.

The Steelers have only taken one player from a non-Power Conference in the second round during Kevin Colbert’s tenure. Meinerz is a powerful interior lineman from a D-III school and lit it up at the Senior Bowl. If Creed Humphrey is not available, Meinerz would absolutely be worth breaking the trend of Power Conference schools and could step in as a starter in the middle of the line immediately.

The Steelers absolutely need to address the offensive line on the second day of the Draft. They have a glaring need at center and also need a starter-capable player at tackle. The guard position gets incredibly deep in the middle rounds of the draft as well. There should be plenty of linemen available over the next few days, in addition to the guys listed above.

There is a sizeable dropoff after Pat Freiermuth, who we feel is the only one worth taking in the second round. Here are some names to keep in mind for the third round, all of whom tested well but had limited college production.

Six EDGE rushers were taken in the first round of the Draft, with four being taken in the last five picks. When looking at EDGE rushers, it is always better to bet on athleticism rather than collegiate production. Some players that fit this mold and are worth considering on Day 2:

The Steelers have their two starting inside linebackers and top backup returning with Devin Bush, Vince Williams, and Robert Spillane. However, the notion of having two rangy inside linebackers that can run and cover has gained a lot of traction after Tampa’s performance en route to winning the Super Bowl. Players that would fit this mold and worth considering on Day 2 (in addition to JOK who was listed above) are:

With Steven Nelson’s release, Cam Sutton figures to step into the starting outside role. Mike Hilton signed in Cincinnati in free agency which also leaves a hole at slot corner. Justin Layne’s recent arrest also puts his future in question which leaves the position very thin. It is entirely possible the Steelers invest multiple picks at the cornerback position. In addition to Asante Samuel Jr and Tyson Campbell listed above, our best available corners are:

The Steelers have two starting safeties set in stone with Minkah Fitzpatrick and Terrell Edmunds. Behind them, the depth is very thin and the Steelers need additional capable backups. No safeties were taken in the first round of the draft so the entire group is still available.

With Mason Rudolph signing a one-year extension, the Steelers don’t have a massive need this year for yet another mid-round backup quarterback. Also, with Rudolph in the fold, they have no need for his clone Kyle Trask. Stanford’s Davis Mills and Texas A&M’s Kellen Mond are the other quarterbacks that will likely be taken on Day 2.

With the drafting of Najee Harris, the Steelers gave a massive boost to their backfield. They do not need to spend another premium pick on a running back with other positions of greater need. Expect a number of running backs to come off the board tonight, led by the North Carolina duo of Javonte Williams and Michael Carter. Memphis’ Kenneth Gainwell is a speedy back and Ohio State’s Trey Sermon came on strong during their postseason run.

Wide Receiver is not a position of need, but you should never put it past the Steelers to use a draft pick on a wide receiver. They have had a lot of success in drafting receivers on Day 2, so it’s never completely out of the question.

This may be the weakest defensive tackle draft in memory. None were taken in the first round of the Draft. There are only a handful that are worthy of Day 2 picks. Alabama’s Christian Barmore is considered the top interior D-line prospect. Washington’s Levi Onwuzurike will also get some Day 2 consideration. Louisiana Tech’s Milton Williams had the look of a late-round sleeper before blowing it up at his Pro Day. With the relatively weak class, Williams vaulted himself into Day 2 consideration. 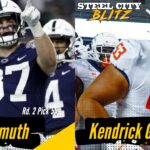 What Colleges do the Steelers Pull From...

Never Too Early Week One Odds for...