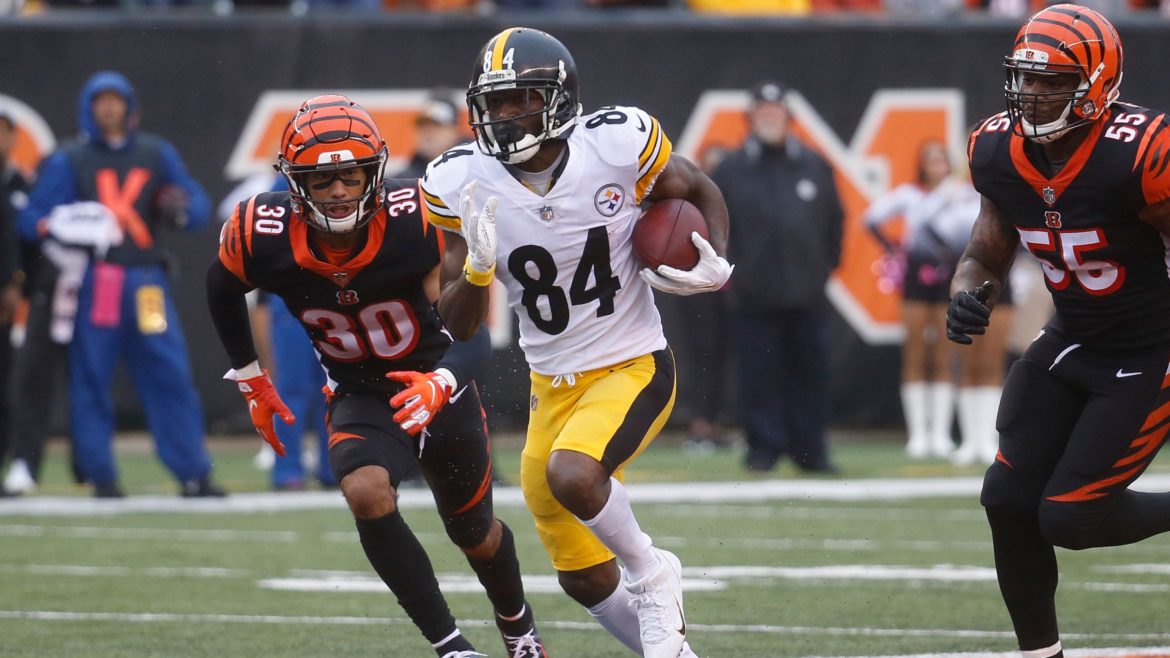 This was the game. This was finally the game where the Cincinnati Bengals broke the curse of the Steelers. And when they scored with less than 90 seconds remaining it sure looked like they would.

Ben Roethlisberger took over at his own 24 yard line with a full compliment of timeouts and with ten seconds remaining found Antonio Brown for the game-winning score. The Bengals came with a jailbreak blitz and Big Ben saw it all the way. With a little help from Justin Hunter, Brown broke inside to where a blitzing linebacker had been. Roethlisberger dumped it to him and the rest was all AB as the Steelers won 28-20.

The game was very much a typical AFC North slugfest. While it lacked a lot of the post-whistle jostling of previous games there were plenty of guys leaving the field periodically with bumps and bruises. I have no doubt that Vontaze Burfict will be getting fined from the NFL perhaps for two incidents. On James Conners’ first score, Burfict stepped on his head in the end zone.

But later, in what was eerily similar to a play where Burfict concussed Brown in the postseason, Burfict did it again targeting Brown’s head with his forearm and shoulder. The shame here is that Burfict is a talented player but there is no longer a place for him in the NFL. He is playing to injure people. Time to get him out and shame on the officials for letting him continue to get away with this crap.

Much of the credit for today’s victory belongs to the offensive line. They didn’t give up a sack all day and rarely let any Bengal close to Roethlisberger. But they also led the way for James Conner to have another huge afternoon. Conner rushed 19 times for 111 yards and two scores. Every one of those five big uglies did some great work today.

Conner was far from the only offensive star though. JuJu Smith-Schuster dropped his first two opportunities before rebounding to make some terrific catches. He ended up with seven receptions for 111 yards. The tight end trio of Vance McDonald, Jesse James and Xavier Grimble combined for over 100 yards receiving as well.

And what more can be said about Antonio Brown? For the second straight week, he entered halftime with almost zero impact on the game. Then in the second half he caught fire. Four of his five grabs were in the second half as was the bulk of his 105 yards receiving.

As for the defense, Joe Haden played well but needs to come up with at least one of the two balls that could have been drive-killing interceptions. Artie Burns continues to struggle as he was beaten for a touchdown and later picked up a pass interference penalty to further a drive. Mike Hilton didn’t get home as a blitzer but was really solid in coverage. Stephon Tuitt (his first of the year), Vince Williams and Javon Hargrave picked up sacks.

Unfortunately when they were needed most they couldn’t stop Andy Dalton and the Bengals late in the fourth. He led them to a lead-taking touchdown which paved the way for the theatrics of Ben and Brown. There is much improvement needed for sure.

Mike Tomlin will no doubt breathe easy tonight knowing his team bailed him out. He challenged a ‘spot of the ball’ call in the second quarter that immediately raised eyebrows. Ryan Switzer had been tackled short of the sticks on third down deep in the Steelers’ own territory and the use of the challenge was asinine. This obviously gave Tomlin cold feet when later in the game James Conner tumbled towards the end zone and appeared to have gotten the ball through the plane of the end zone. The official ruled he was down short of the end zone but replays showed otherwise. Had the Steelers been unable to come back and win this easily would have been topic number one among Tomlin detractors.

Most importantly however was the fact that the Steelers took a huge step in getting back in the AFC North race. They are now 1-1-1 against their foes with games remaining against each. A loss today would have been darn near catastrophic but credit the Steelers for getting the job done once again in the Jungle.