You just knew the whining and complaining were coming didn’t you? Whether it was from fans or from players, it was one excuse after another and I guess we shouldn’t be surprised. Most of the whining is about the decisive touchdown play where Justin Hunter picked a Bengals’ defender allowing Antonio Brown to break open. Despite the fact that these plays occur (especially on third down) all the time the Bengals are still crying foul. OK, let’s say the officials missed the call. Then what about them missing Dre Kirkpatrick‘s post-whistle head butt? What about Vontaze Burfict stepping on the head of James Conner? Or what about Burfict once again targeting the head of Brown? Not one of those three things brought out a flag. Here’s the hard truth. These things go unseen in every game and at the end of the day it comes down to who ultimately makes the plays and who doesn’t. Put away the whine and cheese Bengals and good luck in Kansas City.

If the Bengals really want to complain about something they should look at their defensive coordinator. It’s third and short and Pittsburgh has a kicker who has been less than stable this season. Why on Earth would bring the house against a 15-year vet QB with AB in the slot? You are just asking to be beaten with a big play there.

He's not the same caliber of player but James Conner is more of a "Steelers RB" than Le'Veon Bell ever has been.

Thoughts on the game…

If you’ve watched, played or coached football long enough then you know that a game always comes down to one or two plays. Yesterday was a prime example. Had the officials not called Dre Kirkpatrick for the defensive holding on AB (which was a fair call) then the Steelers would have been facing a 4th and ten.

Not sure what more can be said about James Conner. If he keeps this up he’s going to the Pro Bowl.

Other than the near interception by Burfict, Ben Roethlisberger largely had a nice game yesterday. He managed the offense well and made some really good throws in key situations. His offensive line needs plenty of recognition though too. He wasn’t sacked at all and kept him relatively untouched throughout the game.

The defense played decently Sunday. They forced some very important three and outs but they also gave up the lead on a drive where Andy Dalton carved them up. Too many yards are being given up on slants and outs because guys are just giving too much space. Go back and see how many drops the Bengals had too. The defense did a nice job but they have to get better.

If you want to see a punter consistently flip the field then watch the guy from Cincinnati. Jordan Berry just doesn’t do it often enough.

Solid game by Joe Haden but man, you have to pick off at least one of those two that hit you in the hands.

Perfect day for Chris Boswell. He’ll take it and so will the rest of us!

I am dead serious about this… Someone needs to take the red flag away from Mike Tomlin. He is not thinking when he challenges calls. Ball spots are incredibly difficult to overturn and he should have never challenged that in the first half. What he should have challenged was the James Conner ‘near touchdown.’ Why did he keep it in his pocket??

To add to that, this was the offensive line’s only blemish on the day. From one yard out they couldn’t get into the end zone. I don’t think the play-calling helped but you’ve got to punch that in.

I need to see Matthew Thomas on the field. There has to be at least one specialty package for him right? I love Vince Williams but he just isn’t fast enough to cover these backs and receivers. Thomas needs a shot.

Two holding calls on long snapper Kam Canaday yesterday. Weird. Not a good day overall for Danny Smith’s unit. Gave up way too much on the kick returns. When the offense can start at mid-field you’re killing your defense.

I think this BYE week comes at a great time. Some would argue the team is getting hot and needs to keep rolling but there are just enough bumps and bruises right now that need healing. Two big divisional games await on the other side. 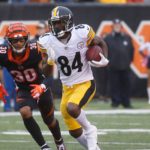