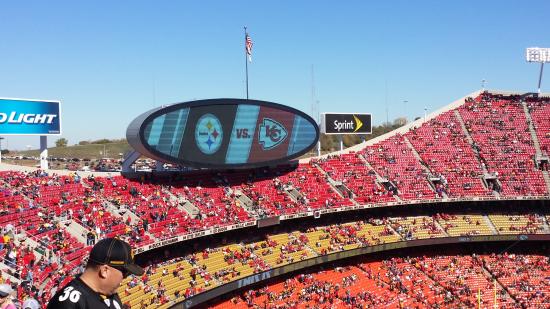 The Pittsburgh Steelers stumble into Kansas City to play in Arrowhead Stadium for the 18th time and you might be surprised to know they have a winning record there. In the previous 18 games (their first meeting was at Kansas City Municipal Stadium) they’ve earned a record of 11-7. In their last five trips to bar-b-que hot spot they’ve lost three of five but won the biggest of the five in the postseason last year.

Here’s a look back at those last five games.

Pittsburgh would go 0 for 4 in the red zone but rode timely defense and the leg of Chris Boswell to the victory. Boswell accounted for all 18 points via six field goals. Le’Veon Bell ran 30 times for 170 yards and Antonio Brown caught six balls for 108 yards. The defense was led by James Harrison who had six tackles and a sack.

With Ben Roethlisberger out due to injury, Landry Jones got the start. The Steelers would lean heavily on Le’Veon Bell who ran for 121 yards on just 17 carries. Jones would perform admirably but two interceptions would be his undoing. The Chiefs got touchdowns from Chris Conley and Charcandrick West to pull away in the second half.

The Black and Gold would score all 13 points in the second quarter on two Shaun Suisham field goals and a touchdown pass from Ben Roethlisberger to Weslye Saunders. The Chiefs could only muster three Ryan Succop field goals and were quarterbacked by former Pitt star Tyler Palko.

The game opened with a bang as Jamaal Charles return the opening kickoff 97 yards for a score. Pittsburgh would blow both a 17-7 lead and a 24-17 lead in this one. Big Ben was 32 of 42 for 398 yards and three touchdowns but he also threw two interceptions. The Steelers would out-gain the Chiefs 516 yards to 282 but three turnovers proved ugly. Kansas City would score with about five minutes remaining and then won the game in overtime on a 22 yard field goal by Ryan Succop.

Tommy Maddox led the Steelers into Arrowhead Stadium and had the team trailing just 27-20 at the half. Priest Holmes would tack on two second half touchdown runs to cap the win. Maddox would throw for over 300 yards but he also threw three picks. Amos Zeroue led the Steelers’ rushing attack with 48 yards on 11 carries. Both Hines Ward and Plaxico Burress would go over the 100-yard mark receiving as they combined for 16 catches.

After last week’s hoe performance, a second straight win in Kansas City would be well-received and needed!