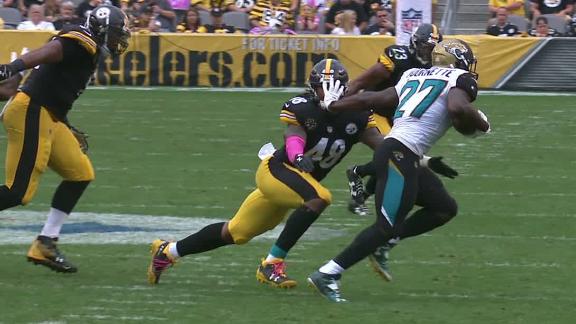 Every head coach has to deal with losses that just shouldn’t have happened. Bill Cowher had them and Mike Tomlin has had so many that they’ve almost taken on a life of their own. We’ve had losses to teams like Oakland and Cleveland and Tampa Bay where nothing seemed to go right no matter how much more talent we had. The loss to Jacksonville today felt similar but at the same time something felt different and I don’t think it’s a good thing.

To be honest, there are few teams that can survive five interceptions, two of which went for touchdowns. But let’s take those of out of the equation. What is your level of confidence that the Steelers would have been able to score on any of those drives? I know mine isn’t that high.

Those other losses I mentioned above were by good Steelers’ teams but the expectations of this version of the Black and Gold were much higher. Picked by numerous ‘experts’ around the country to be in the Super Bowl, Pittsburgh is underachieving and don’t let the 3-2 record fool you.

The defense has come to the rescue numerous times and nearly did again today if not for the pick-sixes. This isn’t how this was supposed to go. This year’s team was supposed to be a fast break on grass and it can’t even set up a half-court offense right now.

But still, why does this feel so different? Was the controversy over the team’s decision on the National Anthem really that divisive? Was Antonio Brown’s sideline tantrum that significant? Perhaps it’s a little of both. Or maybe it’s that Martavis Bryant missed an entire year of football or that Le’veon Bell missed all of Training Camp.

The harsh truth is that this feels different because Ben Roethlisberger is struggling. His first four games often felt like watching a man on a wire 1,000 feet up in the air. You knew he could do it but every single second was a heart attack. Today the wire snapped and many of us saw a once promising season fall to Earth. What we saw today was the ‘Big Ben on the road’ but at home and that’s a huge concern.

OK, maybe that’s a bit over the top because there’s a long way to go in the 2017 season. If there’s anything to know about the NFL it’s that it is a game-to-game, week-to-week endeavor where things can change rapidly. For all we know the Steelers will roll into Kansas City next Sunday and they’ll roll out with a win.

But that would suddenly feel different too now wouldn’t it? 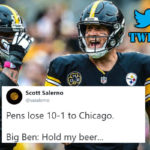