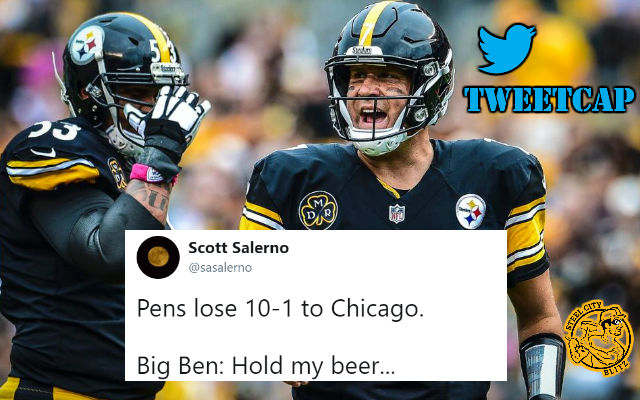 The Steelers held the Jags to a 3-and-out and went right after their defense.

Told you ben would go to ab first play’

Antonio Brown just did Ramsey like he was wrongly holding Winterfell from the Starks.

Just like vs. DEN last year, #Steelers will want to prove they can throw on anyone.

The defense held again and the offense was rolling, but Jalen Ramsey undercut a pass to Vance McDonald.

Ramsey had a really similar pick like that against the Ravens. Pressured forced the throw.

If Ben Roethlisberger led his intended receivers as hard as he leads the team on his radio show — well, he'd have fewer INTs.

Jacksonville rolled down the short field and scored.

Huh. No empty back sets and some simple runs. What a concept.

Fournette motioning for the crowd to get louder is…odd.

The Steelers gave the ball back to the Jags and the defense continued to struggle.

Only our defense delights and celebrates giving up their 735th first down of a drive ????

Not a good challenge by Tomlin.

Ridiculous challenge. Nothing is going to change that. Might as well have just called timeout and saved the challenge. Result will be same

Jags are making this look way too easy. Defense struggling to get off field. No spmash plays. Not good enough… SMH

Team once again getting beat in all facets of game. On paper they should be champions but in real life they are average. Hard to understand

What kind of a name is Blake Bortles anyway

The defense finally got off the field thanks to a Vince Williams sack.

The defense needed that in a big way.

Vince Williams sack is welcome pressure for Steelers, who struggled getting pressure on Bortles this drive.

The offense struggled in a two-minute drill.

Bell got tackled before he caught the ball and that’s not a penalty? He was tackled.

What an atrocious half of football. Whew.

This Steelers offense is AWESOME!!!

There is no excuse for this offense to suck this much. This is a recording.

Another awful punt at an inopportune time for Jordan Berry. He specializes in this.

The script got flipped when Ryan Shazier took the ball away from a Jags receiver.

Two big plays got us into field goal range.

Ramsey tackling like Mitchell on that one #HereWeGo #SNUProud

We'll take the points.
Wizard of Boz FG is good

The Steelers started the second half by driving down inside the 5, but couldn’t punch it in.

Bubble screen happy again! But if it's working ….

I put my Steelers jersey on finally, yinz are welcome https://t.co/sbvpzHNr9I

#steelers finish like I do on dates: settle
9-7 lead over #jaguars

Stop me if you've heard this one before: The Steelers kicked a field goal after a red zone possession

The defense forced a 3-and-out thanks to a clean-up sack from Trent Jordan Watt.

Another #Steelers sack…this one by T.J. Watt!

But Ben threw a pass right to a Jags defender who ran it in for 6. And then another.

So how will Roethlisberger blame Antonio Brown for that pick-6? Embarrassing.

I support brown in his temper tantrum last week. Ben has been awful.

lol the steelers tanking for a QB

Good thing there isn't any Gatorade coolers in the stands.

WOW Fournette waiving to Mike Mitchell to invite the hit while running at him. That is amazing.

Jacksonville just running it down our throats

Team is done today. Heart is gone. I'm looking at Tomlin, Ben and Haley. Disgusting. I'll stay on to read the excuses for Ben and Tomlin.

Somewhere in there, Mike Tomlin decided the Steelers hadn’t done enough losing today, so he wanted to lose another challenge.

Tomlin is going to lose his second challenge. Not a good day all around for #Steelers

WHO IS FEEDING YOU THESE CHALLENGE CALLS

why would you challenge that? Is anyone looking at this ahead of time to advise Tomlin what to do?

Good Lord, who is telling him to challenge these plays????

I havent seen the 4th quarter of a reg season game this empty in a longggg time pic.twitter.com/cpUGMBLJcj

The Steelers would be winning if we still had Marc-Andre Fleury. Big mistake letting him go.

All you bitches take my shots! pic.twitter.com/LaOd43CV6g

Yeah, it was all downhill from there.

One for the thumb.

Blake Bortles throwing for 85 yards and being the better QB in the game is ?

I'm sending you all a virtual hug. It's needed.

Still plenty of time to throw another INT.

This is not an exaggeration…..I have never been as disappointed in my team as I am right now at this moment.

Well I am glad I stepped out to get a drink

Where have you gone Dennis Dixon?

Ben would toss the water cooler but it would just end in a Jacksonville DB’s hands. 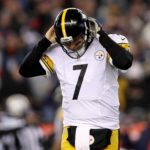 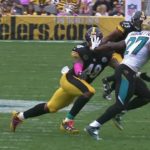