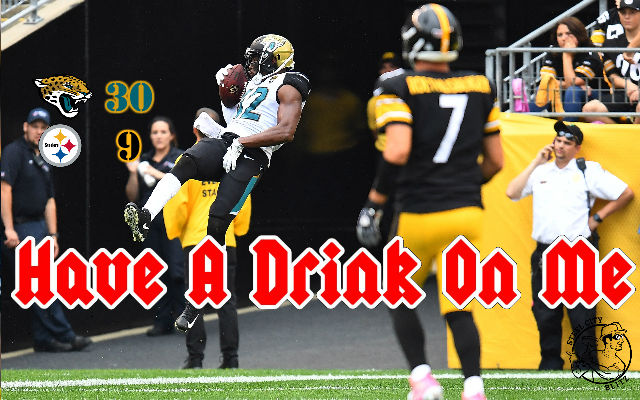 Well, that was a mess. The Steelers rolled back to Heinz Field with a 3-1 record, fresh off beating Baltimore. Jacksonville was coming off a loss to the “Tank For Darnold” Jets. The Steelers knew the Jaguars were going to run the ball, and had the worst-ranked run defense in the league. Everything leading up to this game pointed to an old school “run the ball and stop the run” kind of gameplan for success. The Steelers did neither. Nothing really to say about it, so here’s some GIFs to help us all feel better.

The Jaguars got the ball first but the defense held to a 3-and-out. Ben came out gunning and hit AB deep over the top on the first play to get us into field goal range. The offense couldn’t do much else but got on the board with an early 3.

The Jags couldn’t do much else and gave it right back to the Steelers offense, with a good punt pinning us at the 4. Le’Veon was able to get us out of the shadow of our own goalposts with a few short passes and some strong runs. The Steelers got across midfield but in a harbinger of things to come, Ben was picked off by Jalen Ramsey, who undercut an in-route from Vance McDonald.

The Jags took advantage of the short field and Leonard Fournette lept over the line to score.

The teams traded punts as thed Steelers offense struggled with field position and the Jaguars couldn’t drive the length of the field. The Steelers faltered on a two-minute drive and sent it back to the Jags. After a terrible punt by Berry, Shazier atoned for things by ripping the ball away from a Jags receiver.

Ben hit two passes to get us into field goal range and Boz cut it to 1 before the half.

The Steelers got the ball out of the half and drove down the field with a balanced offense of running and throwing. They got down inside the red zone before they got too smart for themselves. With first and goal at the 5, they attempted 3 passes, with only the last one actually going into the end zone. And that was a low-percentage throw to the back corner to a covered Antonio Brown who basically had to play defense to prevent it from being picked off. Not one run inside the red zone.

The Steelers had a 9-7 lead and things were looking good as a TJ Watt sack forced a 3-and-out for the Jags.

But things went from good to “full Chrenobyl” very, very quickly. A tipped pass was intercepted and run back for a touchdown by a Jags linebacker.

Negative plays forced two third and longs on the next drive. The first one the Steelers converted, the second was intercepted by Penn Hills alum Barry Church who ran it back for another touchdown.

Jaguars running interceptions back for touchdowns against the Steelers. We’ve seen that script before.

In 2 and a half minutes of game time the Steelers went from up by 2 to trailing by 11. The offense got to midfield and Ben got sacked on third down, which is marginally better than an interception.

The Steelers defense had played all of 3 plays in the third quarter, so you would think they would be rested. Unfortunately they seemed to have forgotten how to play during that time. They missed tackles all over the field, including Mike Mitchell, whose highlight of the drive was getting pointed at and run over by Leonard Fournette then celebrating afterwards.

The Jags ran the ball out from their own goal line al the way into Steelers territory and kicked a field goal without Blake Bortles having to throw a single pass.

Guess what happened on the Steelers next drive? LOL just kidding you already knew, Ben threw an interception.

The defense forced a 3-and-out and used a few timeouts to try to mount a desperation comeback because at this point were were somehow only down 14 with 4 1/2 minutes to play. It was theorhetically possible, and the Steelers drove into field goal range, with a touchdown pass to AB getting nullified by a holding call. Two plays later, Ben got greedy and tried to go deep to AB but threw it right to a Jaguars defender instead.

Just to rub salt in the wound, Leonard Fournette ran for a 90 yard touchdown, which was more yards than Blake Bortles had passing all game.

Yeah, stay off the internet this week.

Have A Drink On Me: Steelers-Jaguars GIFcap was last modified: October 10th, 2017 by Ian
#steelers2017 seasonJaguars