Steelers History: T.J. Watt Wraps Up His College Years in the Cotton Bowl 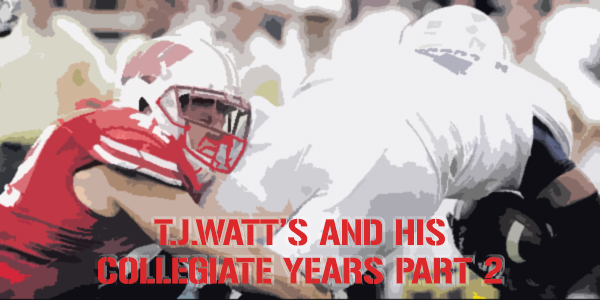 This is part 2 of a 2 part series on the development of T.J. Watt on his way to becoming the NFL’s Defensive Player of the Year. Here’s Part 1.

After his slow start in college through injury, T.J. Watt made rapid progress after his decision to switch to playing defense. The Badgers went into the 2016 season with depth at their linebacker corps with redshirt junior Garret Dooley and redshirt freshman Zack Baun. 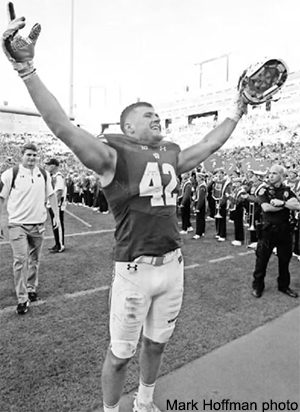 The first game of the season on September 3 saw Wisconsin defeat #5 ranked LSU 16-14 with Watt suggesting afterwards, “I feel like we were out to gain respect, and I think we did it at the end of the day.”

Writing for the Associated Press, before the Badgers played Michigan State, Noah Trister noted, “Wisconsin’s front seven leads one of the nation’s top defenses, with LBs T.J. Watt and Vince Biegel powering the pass rush off the edge.”

Watt recorded 2.5 sacks and 3.5 tackles for loss when the Badgers logged four turnovers as they overran Michigan State 30-6. For his performance, Watt was named the Big Ten Defensive Player of the Week.

“Defensively as a whole we are improving and we’re still scratching the surface and the sky’s the limit,” observed Watt as UW moved up from 11 to 8 in the AP rankings.

Against Georgia State, they were pushed all the way before three touchdowns in the second half prevented the upset ahead of a 23-17 win.

Against Michigan, who were ranked three places above UW, Watt recorded a sack and 11 tackles which were a personal best. Wisconsin held Michigan to a 7-7 tie until halfway through the final quarter when they gave up a 64-touchdown drive that lost them the game.

The games didn’t get any easier for the UW when two weeks later second-ranked Ohio State came into Madison. The Badgers took the contest into overtime before the Buckeyes escaped with a 30-23 victory.

Dropping to #10 in the AP rankings, the Badgers traveled to Iowa to play the unranked Hawkeyes and triumphed 17-9 with Watt adding another 1.5 sacks.

Seven days later, another overtime game saw the Badgers emerge with a 23-17 victory against Nebraska although Watt left the game late with a shoulder injury.

At the beginning of November, the Badgers faced the Northwestern Wildcats, who had won four straight in Ryan Field. UW’s 21-7 win saw them rise to seventh place in the rankings.

A week later, the Badgers overwhelmed Illinois 48-3.  “We were clicking on all cylinders,” said Watt. “Our goal this was week was to have a perfect game… not perfect, but a complete game – offense, special teams and defense. I think we executed pretty well. I’m very pleased with our performance. We’re going to celebrate tonight and move on.”

The success of the Badgers and Watt’s contribution to their defense began to see him coming to the attention of more football fans and the comparisons to his older brother increased. The Badgers defense was recognized as keeping the team in games while their offense struggled. Watt had contributed 7 sacks to a solid display.

Facing unranked Purdue, Watt was realistic, “You have to have to take every opponent seriously. These guys are getting recruited to football too. They are really good athletes. They were the top dogs at their high school, and they are doing good things in college too.” 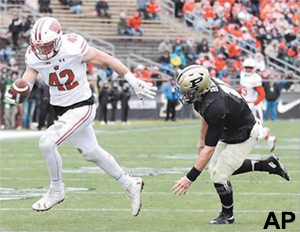 Purdue were coming off five consecutive losses and a streak of a 10-game losing streak in the series with UW. As expected, the Badgers sank their opponents 49-20 with Watt enjoying his first collegiate interception which he returned for a touchdown. He also added a sack to his total, increasing it to eight.

Against Minnesota, UW were behind 17-7 at the half after being outplayed for thirty minutes.  In the locker room, Watt gathered the defense around him and told his teammates they were playing as individuals instead of one eleventh of a unit. Safety Leo Musso emphasized Watt’s message stating they were not playing Wisconsin football.

Their compelling messages had the affect and the Badgers scored 24 unanswered points as they beat the Gophers 31-17. T.J. Watt recorded 1.5 sacks and 6 tackles.

After the game, Watt said, “We got punched in the mouth and we tasted our blood a bit,” before adding, “We got gritty and punched them right back. That just shows who we are as a team and it can show opponents we’re not going to give up.”

The victory set up a Big Ten championship game against #8 Penn State on December 3.

At the end of November, UW’s coach Paul Chryst was named the Big Ten Conference Coach of the Year. Watt was a consensus All-Big Ten First team selection, an honor awarded previously to his brother.

T.J. was surprised by the honor admitting, “I didn’t even know the awards were coming out,” before adding, “I’m not focused on individual accolades at all.”

In the Big Ten championship game, the Badgers took a 28-7 lead before the Nittany Lions hit back with touchdowns on their next four possessions to prevail 38-31. Watt contributed a sack and recovered a fumble on the play. The Badgers were without two stars on defense although Watt wasn’t prepared to blame the team’s collapse on their absence.

At the beginning of December, Watt was named to the Associated Press All-Big Ten team and to the AP All-America second team.

The season finale for the Badgers would be the Cotton Bowl against Western Michigan. As it approached, the attention turned to the question whether any of their players would enter the NFL draft. Watt was projected to be a second or third round pick if he decided to skip his senior year. His knee injuries and his lack of experience were working against him to be selected higher.

If Watt’s intention was to showcase his talent before declaring for the NFL, he certainly did it on a national stage in Texas as the Badgers put their Penn State nightmare behind them.

UW took the lead half-way through the first quarter and never lost control of the game finishing 24-16 victors.

Watt contributed a sack, a forced fumble, one pass broken up and four tackles to finish his season. “We’ve been through a lot and the way we were able to do it today kind of sums up our season,” Watt said. “We started strong. We faced some adversity. And then we bounced back from adversity and got the win. It’s just a great way to finish the year.”

Watt declares for the draft

The day after the Cotton Bowl victory, Watt tweeted his intention to declare for the NFL.

“Playing for the University of Wisconsin has always been a dream of mine and I am extremely fortunate to have been able to fulfill that dream. After thinking over the options and discussing them with my family, I have decided that the time has come to continue my journey and declare for the 2017 NFL draft.”

The Badgers began the season unranked and finished with their first major Bowl victory for over a decade while Watt began the season recovering from knee injuries to become a major player in the NFL draft.

One draft preview by Jourdan Rodrigue on Watt read, “Scouts love Watt’s versatility (he can play as an inside or an outside linebacker) and football I.Q., and that’s part of the reason J.J. Watt’s younger brother declared for the draft a year early. On tape, Watt shows impressive burst and ability as an edge rusher. He recorded 14.5 tackles for loss and 10.5 sacks in 2016 and was also solid against the run.

NFL Network’s Daniel Jeremiah had Miami choosing Watt, describing him as “not as freaky as his older brother, but he is a very good football player. He is ultra-versatile, athletic and instinctive.”

Miami management met with Watt at the Senior Bowl and at the time he acknowledged, “I bring a lot of versatility. For me, it’s about being a team player and being committed to the team. I’ll play wherever they need me. Any of those spots, I want to go in there and make a team better.”

The Steelers had no doubt he could make their team better. After losing Lawrence Timmons to Miami, they had a pressing need at inside linebacker.

After reaching the heights of the AFC Championship the previous season, the Steelers had a low pick at thirtieth in the 2017 draft. Steelers general manager Kevin Colbert said, “T.J. Watt is somebody we’ve had our eye on really since early in the fall.”

The Steelers selected Watt and he reacted to his selection with enthusiasm. “I’m ecstatic to be a Pittsburgh Steeler. It’s insane.”

Since the Steelers drafted T.J., it has been an impressive journey and it was great to finally see him recognized as the NFL’s best defensive player.

Steelers named as AP Defensive Player of the Year

Credits for inputs to this article to Jason Galloway for Capital newspapers, Dennis Semrau Associated Press and Jeff Potrykus of the Milwaukee Journal Sentinel.