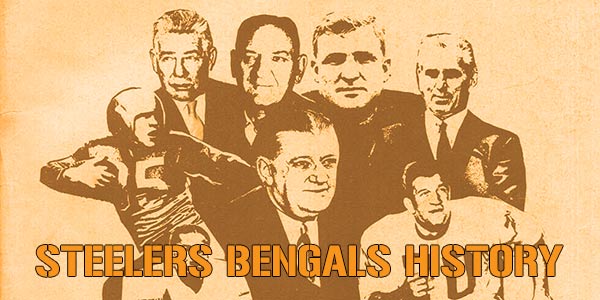 The Pittsburgh Steelers and the Cincinnati Bengals have been rivals in the same division since the 1970 merger of the AFL and NFL. This ensures the two teams meet twice in the regular season except for 1982, which was the year of the players’ strike. It was also the year that football began to be shown in the United Kingdom and when I began to take an interest in the game and the Steelers.

Pittsburgh has dominated the rivalry and has a 66-35 record over their opponents.

After the heady days of the seventies, the beginning of the eighties was a challenging time for both the Steelers and the NFL. The USFL was set up to challenge the dominance of the NFL in pro football and the Steelers were seeing members of their Super Bowl teams retiring. Before the 1982 season began, they saw Joe Greene, Randy Grossman, Jon Kolb, Sam Davis, and Dwight White depart. Although he was struggling with an elbow injury, Terry Bradshaw was still playing.

The Bengals were the AFC representative in the previous year’s Super Bowl and had opened the 1982 season with a 27-6 thumping of the Houston Oilers.

Franco Harris was in his final year of wearing black ‘n gold. In the season opener, he rushed for 103 yards on 24 carries while Bradshaw completed 17 of 28 passes for 246 yards and three touchdowns to upset the Cowboys 36-28 in Dallas.

Cincinnati were on a four-game winning streak against Pittsburgh who were suffering with a banged-up offense. Lynn Swann was hurting with hamstring pulls while his backup Jim Smith was in hospital with an unknown illness. The Steelers also had problems on defense with Jack Lambert limping around the practice field.

That Steelers injury worries didn’t concern Coach Chuck Noll who suggested, ”We’re going to use a lot of people. We hope by doing that we will continue to improve. Our guys played well the whole preseason. Their confidence has been growing.”

The Steelers vs the Bengals September 19th 1982 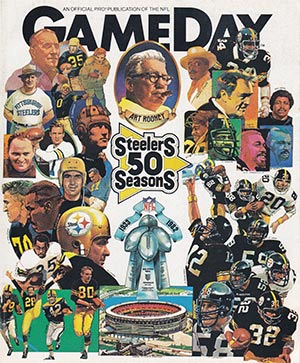 Pittsburgh took a lead in the first quarter when Terry Bradshaw found John Stallworth in the end zone with a 15-yard touchdown pass. The teams exchanged field goals in the second quarter before the Bengals tied the game in the third period with a Pete Johnson touchdown run of one yard.

Bennie Cunningham with a 2-yard touchdown pass from Bradshaw restored the Steelers advantage before another scoring run from Johnson drew Cincinnati level again.

With the score tied 17-17, Jim Breech kicked a 31-yard field goal to give the Bengals their first lead of the day. The Steelers hit back with just 35 seconds of the game remaining when Gary Anderson hit a field goal from 42 yards.

With twenty seconds remaining Breech lined up to kick what should have been the game winning field goal, but Lambert led a posse of Steelers through the Bengals kick formation to block the attempt.

A minute into overtime, the Bengals were facing a third and six with the Steelers in a pass-prevent defense. Jack Ham, lined up at middle linebacker, blitzed over the middle and came close to sacking Anderson who was hurried into throwing a pass.

Dwayne Woodruff stepped in front of the intended receiver, Steve Kreider, and picked off Anderson’s pass. Woodruff returned in 31 yards to the Bengals’ 2. Bradshaw assumed Noll would send in Gary Anderson to kick the field goal, but he managed to talk his coach into a pass play that paid off. Bradshaw lobbed the ball to Stallworth in the end zone and the Steelers took the 26-20 win.

Bradshaw’s three touchdown passes moved him ahead of Bobby Layne on the NFL’s all-time list with 199.

The following day, the players association voted to strike, and each team lost seven games in the year the Steelers were celebrating their 50th season.

The Steelers finished 6-3 and were edged out 31-28 in the wildcard game by the Chargers while the Bengals ended 7-2 and lost to the Jets in the other wildcard game. 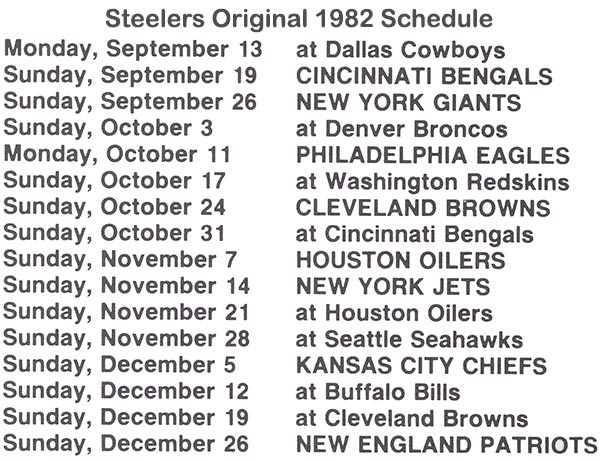 SCB Steelers Quick Hitters: The “Not Our QB!” Edition