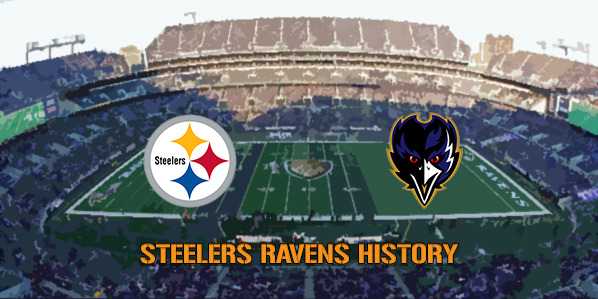 It’s only a month since the Pittsburgh Steelers edged the Baltimore Ravens 20-19 in Pittsburgh after John Harbaugh apparently had a Mike Tomlin moment and went for a two-point conversion that failed. That success increased the Steelers’ overall advantage to 31-24 in all-time wins in the series. On the road, Baltimore holds a one game lead at 13-12.

Ben Roethlisberger made his debut against the Ravens in week 2 of his rookie season 2004 when he came on for Tommy Maddox who was injured. He scored two touchdowns in the loss, but it was obvious he would become the Steelers’ franchise quarterback for years to come.

Roethlisberger has more wins against Baltimore than losses and has scored over forty touchdowns during the contests.

Before the arrival of Roethlisberger, the Steelers also dominated the Ravens, but it was Baltimore who in 2000 won their first Super Bowl during this period. Linebacker Ray Lewis was also named the NFL Defensive Player of the Year.

Before the two teams met the following season, Lewis mocked Pittsburgh’s top ranked defense, suggesting he wouldn’t trade a Baltimore second teamer for any of the Steelers’ starters.

The Steelers would clinch the AFC Central with a victory, but Lewis was assured in his determination, “We’ve got what they want. Period. The road to the Super Bowl comes through Baltimore.”

The Steelers would travel to Baltimore with a five-game winning streak after the Ravens had won a bruising battle in Heinz Field 13-10. Pittsburgh had amassed 348 yards of offense to Baltimore’s 123, but four missed field goals by Kris Brown gifted the Ravens the win.

Although the Steelers had lost, wide receiver Plaxico Burress suggested the Steelers “beat up” the Ravens. Baltimore’s tight end Shannon Sharpe dismissed that claim and gave Burress the new nickname of “Plexiglass.”

The rivalry was intense and Pittsburgh’s linebacker Joey Porter acknowledged, “Our whole goal this year was to make it tough to come into Heinz Field. They ruined something for us beating us at home. That hurt. It hurt a lot.”

“This is one of those big games,” admitted Coach Cowher. “Words are not needed to get ready for this game. The playoff implications, the meaning of the game… that’s all that needs to be said.”

With Pittsburgh’s defense ranked number one and the Ravens number three, the contest gave every appearance of being a low scoring one just as their first meeting had proved.

Without their star running back Jerome Bettis recovering from a groin injury, the Steelers looked to a ball-controlled offense from quarterback Kordell Stewart for the win.

As expected, defenses controlled the initial exchanges, and it was only the boot of Kris Brown that broke the deadlock in the first quarter. His 22-yard field goal completed the Steelers’ first possession. Their drive of 64 yards took eight minutes off the clock.

The Ravens’ next series moved the game into the second quarter and saw quarterback Elvis Grbac finish their drive with a 2-yard touchdown run that edged Baltimore in front.

The Steelers replied with another field goal, this one from 33 yards before Baltimore’s Matt Stover missed one from 48 yards. His NFL record of kicking a field in 38 straight games ended with that miss.

With six minutes now remaining in the first half, Stewart moved the chains with short passes and runs before finding Burress with a 25-yard touchdown completion. Stewart was under pressure from former Steeler Rod Woodson when he launched the pass.  Cornerback Chris McAlister and Burress both leapt for the ball. After McAlister managed to deflect it, Burress reached out with his left hand to pull the ball in for the score.

Chad Scott intercepted Grbac on the Ravens’ next possession and Pittsburgh led 13-7 at the half.

On the first series of the second half, Stewart took eleven minutes off the clock before Brown missed a 32-yard field goal attempt. The teams then exchanged possessions as their defenses regained their authority and the game moved into the final period.

Five minutes into the quarter, the spark the game demanded was ignited by Stewart. Under pressure again and throwing from his own goal line, Stewart threw a perfect pass to Bobby Shaw on the 38. Shaw raced to the end zone for a 90-yard touchdown. The two-point conversion attempt failed but the Steelers still held a twelve point margin.

A 32-yard kickoff return saw Baltimore begin their next drive on Pittsburgh’s 42. With the game now opening up, Grbac began to find his receivers and found Qadry Ismail with a 14-yard touchdown pass.

Stewart replied by finding Burress with a pass of 38 yards on a third down before moving the ball on the ground. Dan Kreider’s 4-yard touchdown run restored the Steelers’ advantage.

With time in the game expiring, Grbac led his team on a 11-play scoring drive with Brandon Stockley’s 5-yard pass reducing Baltimore’s deficit. The Ravens’ attempted onside kick was recovered by Bobby Shaw ending any chance of a fourth quarter comeback for Baltimore to give Pittsburgh the win.

The Pittsburgh Steelers 26 at the Baltimore Ravens 21

Stewart threw a career high 333 yards with 20 out of 31 pass completions providing Plaxico Buress with a career high eight catches for 164 yards. The team’s streak of six wins was the longest for six years and they extended it the following week to seven.

I can’t say enough about Kordell,” Coach Cowher said. “He’s a confident man right now and he’s got some players making plays for him.”

Shannon Sharpe admitted, “We did a lot of talking, but we didn’t back anything up. He added, “Kordell Stewart today impressed me. He won me over. I’m a Kordell fan. I’m not a guy who is easily impressed but I give him credit. He threw the ball exceptionally well. He ran their offense. He did a great job.”

An exuberant Plaxico Burress enthused, “They (Ravens cornerbacks) were doing a lot of talking all week, calling me plexiglass, stuff like that all week, but they know my name now.”

Kordell Stewart joined in with, “Plexiglass did a very good job today. That’s what happens with plexiglass. It bends, but it doesn’t break.”

The Steelers went on to win their first division title for four years. The Ravens finished 10-6 and also made the playoffs where they lost 27-10 against the Steelers in the divisional game.

The Steelers lost the AFC Championship game to the Patriots.

Roethlisberger Deserved Better But the Time Has...