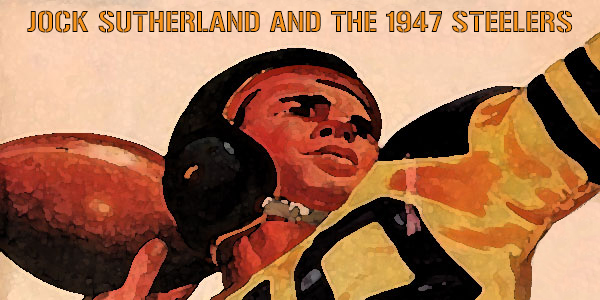 After his first year coaching the Pittsburgh Steelers to a 5-5-1 season, Coach Jock Sutherland observed, “That’s all history, I hope we can do better next fall.” His goal was to improve on that record, and he began work immediately to ensure he succeeded, sending his scouts out looking for talent as soon as the season finished.

In April 1947, Sutherland joined in the search for players when he went on an extensive automobile tour of the south intending to visit twenty-three colleges.

The organization announced they would be moving their training camp from Hershey to Alliance College, Cambridge Springs as it was closer to Pittsburgh. It would be the eighth different site the team had used since 1933.

The Steelers opened their camp on August 4 with a roster of over fifty players that needed to be reduced to 35 before the season opened. All but 16 of them were rookies as Sutherland sought fresh talent among the assembled athletes.

With the eventual trade of “I’m retiring” Bill Dudley to the Lions, Sutherland could finally put the escapade behind the team and focus on the season ahead. The Steelers received three halfbacks and Detroit’s number one draft pick for next season in the trade.

Before playing their first exhibition game, the roster had been reduced to 44 aspiring players. Although they beat the Bethlehem Bulldogs 28-0, the Steelers were none too inspiring on the field. 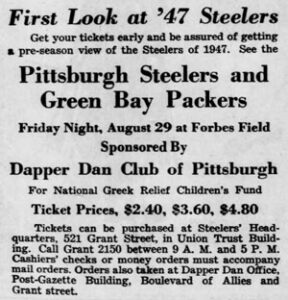 The Steelers organization went into overdrive to publicize their second preseason game at Forbes Field against the Green Bay Packers and over 31,000 fans turned out on a summer’s evening to witness the surprise result.

For fourteen years, the Steelers had repeatedly failed to beat the Packers and went into the game as underdogs.  Pittsburgh’s 24-17 victory made the rest of the NFL sit up and take notice of a revived Steelers team. Backfield ace Johnny Clement drew the praise for his performance.

The Steelers next overran the Norfolk Shamrocks 48-0 with Clement scoring two touchdowns in the first quarter before being rested as the opponents only fielded a team of 20 players.

The Steelers coasted to a 35-0 win in their final exhibition game against the Richmond Rebels. Returning from a training camp injury, Clement threw three touchdown passes as the Steelers ground game struggled.

Football fans in Pittsburgh were excited to host the NFL season opener against the Detroit Lions and Bill Dudley. The fans had brought 28,000 season tickets by July, twice as many as the 10,000 in 1946.

The Pittsburgh Post-Gazette chose to run this headline for the game, “Jock-Dudley Feud Reaches Climax in Sunday’s Game.”

The Steelers began the week before the game as 1-point favorites, but the city that lives for football was certainly confident how well their team would perform without Dudley and the Steelers had moved to -5.5 by game time.

It was a big game for both teams. Detroit was keen to improve on their 1-10 record of the previous season and needed to show their investment in Dudley was justified. Coach Sutherland was eager to show his team could shine without Dudley and there were over 36,000 fans anxious to see a great football game.

In a bruising battle, it was Dudley who led the way in the first quarter after the Steelers had missed a 46-yard field goal attempt. Dudley caught a 23-yard touchdown pass to give his team the lead

The Steelers fought back and Walter Slater tied the game in the second quarter with a 20-yard touchdown pass to Val Jansante. Both defenses kept their opponents quiet until that man Dudley made his mark again in the third quarter with an interception that set the Lions up for a field goal to extend their lead to 10-7.

The game appeared to be heading for a Detroit victory with Dudley certain to make the sporting headlines, but Pittsburgh’s Bob Davis had not read the script. With just seven minutes remaining, his vicious tackle on Clyde LeForce forced a fumble that Joe Repko picked up and rumbled 48 yards into the end zone to edge the Steelers in front.

As the Steelers defense stepped up to protect their lead, they forced another fumble and the recovery led to a 35-yard field goal to cement the Steelers win.

Dudley had won the skirmishes, but the Steelers won the battle 17-10.

The next sell out game at Forbes Field saw the visit of the former Cleveland, now Los Angeles Rams who had spent the week in the mountain retreat of Ligonier, Pa preparing for their first game of the season.

The Steelers were outclassed by a rampant Rams team led by Bob Waterfield and overpowered 48-7. They handed Jock Sutherland his worse defeat in collegiate and pro football, but he remained gracious in his response, “The Rams are about as good a football team as I’ve seen since the Bears of 1941.”

Although disappointed, the Steelers had little time to reflect on the loss as they prepared for their visit to the Washington and their adversary Sammy Baugh.

It was Baugh who made the national sports headlines with his three touchdowns, but it was the left upright that made the headlines in Pittsburgh. Trailing by a point and with 25 seconds remaining, Joe Clamp’s 29-yard field goal attempt hit the upright and the Redskins triumphed 27-26.

Two wins the previous season against their next opponents the Boston Yankees gave the Steelers reason to be cheerful about getting back to winning ways and so it proved. They travelled to Boston and romped over the Yankees 30-14 scoring a touchdown in each quarter. The crowd of 18,894 was considered “sparse,” but such were the changing views in which pro football was now being regarded as more football fans flocked to watch the NFL.

Their next battle was against their Pennsylvanian rivals the Philadelphia Eagles. Despite the Eagles coming off a 40-7 pounding by the Bears, the Steelers were the 6-point underdogs.

Johnny “Zero” Clement finally made his mark as a Steeler when they overcame the Eagles 35-24 with his four touchdowns, two on the ground and two through the air. The Steelers were behind 24-14 at halftime, but the fightback began in the final period with a Walt Slater end zone interception that led to a Steelers 19-yard touchdown pass from Clement. The Steelers then took their second lead of the game with Clement’s touchdown run of 23 yards before Steve Lach’s 1-yard scoring run sealed a majestic victory.

The win moved the Steelers to the top of the Eastern division and they were favored to beat their next opponents, the (0-3-1) New York Giants at the Polo Grounds.

The Steelers controlled the game from the start, posting a halftime lead of 27-7 before taking a 38-21 victory. The 38 points they scored were the highest ever for a Pittsburgh team in the NFL. It was a complete team effort with touchdowns from Steve Lach (2), Bill Garnaas, Frank Sinkovitz and Val Jansante.

With half of the 1947 season played, the Steelers were sitting on top of their division, playing sound basic football under Jock Sutherland’s coaching. Could the team pull off the impossible and make the playoffs for the first time? Come back Steel City Blitz next week to find out 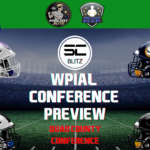