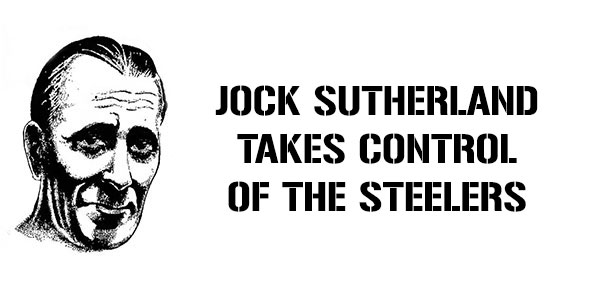 With a new head coach in Jock Sutherland, Art Rooney was determined to leave the calamitous previous three years behind and enjoy a winning 1946 season.

The signing of Sutherland was also the tonic Pittsburgh sports fans were seeking after the austerity of the war years and there was an immediate rush for box seat reservations… a novelty for a team that had seen so many losing seasons.

Sutherland wasn’t happy with the team he inherited and declared he would rebuild the squad. “I intend to use the system I know best,” he announced. ”As for the Steelers roster, we will just have to start at the bottom and build. Frankly, I couldn’t win with the squad which ended the past season.”

Ever the realist, Sutherland knew what he needed to do, but first he had a final assignment overseas. Before agreeing to his position with the Steelers, he had accepted an assignment to coach the Hawaiian Area Army Pacific football team for the GI Olympics in Tokyo.

Leaving for overseas before the NFL draft took place, he left his assistant Johnny Michelosen in charge. Michelosen had shown his value as Sutherland’s assistant when they were together with the Brooklyn Dodgers.

After his Honolulu All-Stars were beaten 18-0 by the 11th Airborne Angels, Sutherland travelled to his home country of Scotland to visit his mother. After two months of travelling, he arrived back in Pittsburgh to declare, “I am pleased with many of the players we have signed while I was away, but we have a long way to go before any of us will be satisfied.”

The Steelers had opened new offices on Grant Street and everything was put in place in an attempt to provide the Steelers with a successful season. The organization received the biggest advance ticket sales in their history and planned to have a 200-piece band at each home game.

Before training camp opened and his work began on putting his team together, Sutherland acknowledged the task. “I saw a few Steeler games last fall and I know some of these boys by reputation,” he admitted, “but we’ll all be starting from scratch. Fundamentally, the Steelers will be pretty much like the Pitt teams I used to coach. With variations of course.

I’m taking 60 players to Hershey and we will cut down to 33 by the time of the first game. We’re going to run the Steeler camp like we used to operate at Camp Hamilton with Pitt.”

Sutherland produced a timetable for camp that saw his players rise daily at 07.30 with training on the field and classroom sessions to occupy them until lights out at 10 at night. His rigid discipline would have made many of the players think they were still in the armed forces.

Sutherland had one agenda… to produce a winning team. 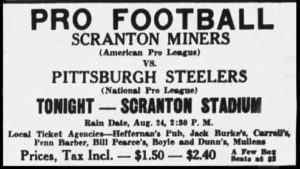 The Steelers played four exhibition games and the signs were good although the level of competition had to be recognized. The largest crowd to watch a football game in Scranton turned out to watch the Steelers overwhelm the local Miners 47-0. The Steelers then rolled over the Newark Bombers of the American League 42-0, crushed the Richmond Rebels of the Dixie Pro Football League 55-6 before destroying the Paterson Panthers 55-0.

Unlike most of the Pittsburgh fans, Art Rooney wasn’t expecting instant success for Sutherland’s first season in charge. “I think in two or three years under Jock we may have something. But I feel pretty sure now, after stumbling around over the years, we are on the right track. And that’s because we got Jock to head us up.”

When the NFL schedule was first announced, it immediately thrust the Steelers under the spotlight as they were given the NFL’s season opener against the Chicago Cardinals. The Friday evening game would put Sutherland and the Steelers on football’s center stage.

Sutherland was realistic about his Steelers team. “I have a fair ball club, but I won’t know how good it is until the game. The Cardinals, like all other league entries, are much stronger this year.”

With the promise of a new dawn for the Same Old Steelers, SteelCityBlitz will share the Steelers’ progress next week.