Steelers History 1943 – The Year of the Steagles 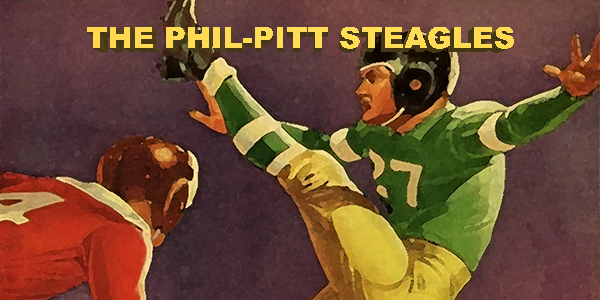 Last week we explored when Art Rooney sold the Pittsburgh Steelers, bought a half share in the Philadelphia franchise before moving that team back to Pittsburgh.

At the time, Rooney predicted the war clouds gathering over the United States would have an effect on football and his prophecy sadly proved to be spot on.  He would not have known what a huge impact the entry of the United States into World War II would have on his country and his team.

From December 1941, the availability of players and coaches for any sport would be dramatically reduced as the athletes volunteered or were drafted into the armed forces.

The NFL’s commissioner Elmer Layden was keen to continue football under the difficult circumstances but voiced concern about it affecting the war effort. “While we believe professional football has a definite place in the recreational program of a nation at war, nothing connected with it should or will be permitted to hinder the war effort.”

The Steelers enjoyed their first winning season at 7-4 in the first year of the war, but the squad began to be depleted as players fulfilled their patriotic duties. When the 1943 NFL draft approached, Rooney acknowledged, “The Steelers will go through the motions although I am not very optimistic about the National League operating next autumn.”

By obtaining the rights to the players his team drafted, Rooney was hoping the war would be over quickly and those college gridders would then be playing for the team when the country returned to peace.

With so many players now working for Uncle Sam, Pittsburgh had been reduced to just six players under contract and Rooney needed to strengthen his squad. The league’s draft had been expanded to 32 rounds and roster sizes reduced to boost the chance of the 1943 season going ahead.

At the owners’ April meeting, when they held the draft, the Cleveland Rams withdrew for the season citing lack of players. The Rams participated in the selection process and retained the rights to their players although they were dispersed amongst the other teams for the year.

Although Rooney added thirty players to his roster, he was still pessimistic about the season going ahead. “Pittsburgh will make an honest effort to round up playing material,” he said. “We will canvass the long list of new men, contact the veterans and search for the 4-Fs.”

4-F was a reference to a person’s draft eligibility into the armed forces and meant, “physically unfit for service.” Uncle Sam might not find the person fit for duty, but football was certainly keen to put some of them into service.

Six weeks after the owners’ meeting the first inkling of a merger with the Eagles was reported in the Pittsburgh Press. Art Rooney explained, “The prospects of continuing on our own look very bad. As I see it, about the only way we could continue to field a representative team, will be to merge with Philadelphia. I feel the merger would be better than to drop out completely like Cleveland did. We could divide the games between Philadelphia and Pittsburgh. Play the games with eastern teams in Philly and with western teams in Pittsburgh. That way we could keep pro football alive in both cities, and at the same time shorten the trips for opposing teams.”

Reducing travel for the teams was a point well made during a time of a gas shortage.

At the June owners’ meeting, the merger was eventually agreed and with eight teams in the league, a ten-game season was scheduled. The new Phil-Pitt team would play six games in Philadelphia with only two in Pittsburgh, leading to some suggesting Bert Bell and Art Rooney “took a beating” over the arrangement.

The Pittsburgh co-owners disagreed, acknowledging the alternate was closing all together with no professional football in the city for the year. After they added an exhibition game with the Packers, the city would have three games to entertain the fans.

The merger agreement saw the teams pool their players, coaches and finances and most newspapers began to call the newly amalgamated team the Steagles. Only the New York’s Daily News insisted on calling them the Philburg Steagles.

Despite the concern about the number of players that would be available to play, thirty-nine athletes turned out in Philadelphia for the first practice drills.

Each team’s roster was cut to 28 before the season began.

Although the Steelers had enjoyed a winning season in 1972, the Eagles managed only two wins. Against a background of disruption that a country at war provides, together with a hotchpotch of resources, the Steagles managed a winning season keeping the interest of fans until the final game in Green Bay. A loss to the Packers before a record crowd of 34,294 saw the Steagles finish 5-4-1.

Pittsburgh fans witnessed two of their team’s victories including a 35-34 thriller against Detroit. The lead changed hands five times and some of the 23,000 fans watching in Forbes Field believed it was the greatest football game to be played in Pittsburgh.

Financially for the team it was also a complete success. The 129,347 fans that turned out was a record for both teams and Philadelphia enjoyed their first winning season. The escape from the fatigue of the war combined with  the team’s success on the field ensured fans filled the seats.

For Bert Bell, the former Eagles owner, the season must have been a strange experience, but he was certain where his loyalties now lay. “If the Steelers combine with the Eagles, or any other team, next fall,” he said, “the majority of the games must be played in Pittsburgh. In 1944 we feel we owe it to our fans to give Pittsburgh the fuller season.”

Art Rooney also made it clear that any future arrangement would need to see Pittsburgh with the majority of games.

SCB Steelers Quick Hitters: The “Not So Smooth” Edition