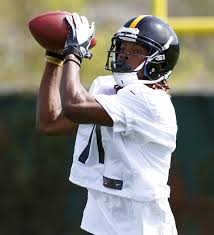 When coaches around the National Football League reveal their depth charts in training camp, there are usually two purposes involved; first is to go ahead and eliminate the obvious and the second is to motivate certain players.

It appears Mike Tomlin is doing exactly that with his first depth chart of 2014.

The first-team offense features one move that might catch some off guard a bit. Markus Wheaton was listed as the number two wide receiver with Lance Moore listed behind him. Personally, I think this bodes well for the offense.

Coming out of OTAs, most of us were under the impression that Moore would probably start the season as the man across the formation from Antonio Brown, but if this holds, that means Moore can go to the slot where he should really thrive in this offense.

Everything else on offense was ‘chalk’ as they say but the clear motivational move was aimed at receiver Martavis Bryant who was listed well down the receiving chart behind names like Lanear Sampson.

At this point, there is no way Bryant won’t be on the roster. He’s been extremely electric in camp by using his speed and athleticism to make catches. While he has numerous things to work on from a receiving and adjustment standpoint, the Steelers can’t deny his ability especially in the red zone.

The defensive depth chart had no real surprises. The starting defensive line of Cam Heyward, Steve McLendon and Cam Thomas was predicted, but rookie Josh Mauro is making a strong bid to catch Brian Arnfelt as the back-up to Thomas.

In the secondary, Jordan Dangerfield was listed behind Troy Polamalu and Shamarko Thomas which is right even though he has had a really good camp. Brice MCain is listed as the number two corner behind Ike Taylor as well.

One final note revolves around special teams where Antonio Brown is listed as the punt returner ahead of Dri Archer. I mention this only because Brown has spent very little time returning punts so far in camp.

We’ll keep you up to date on the chart as it changes whether due to performance or injury.