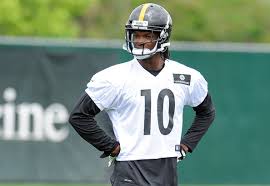 Martavis Bryant has had some electric moments in camp so far but has a ways to go.

Here’s the steelers.com official training camp guide. Practice once again scheduled for 255pmET to in Latrobe.

-Trib-Live Radio’s Ken Laird had some of the best observations from yesterday’s practice. Follow Ken on Twitter @Ken_Laird… Martavis Bryant zipped around Brice McCain for a corner TD. Bryant definitely a project but the tools are evident… Cam Thomas was the first team nose tackle with Steve McLendon getting a day off which meant Stephon Tuitt was first team end… Longshot DL to watch is Josh Mauro who could back up Cam Heyward. Quick for a 6’6″ frame… It only took three plays but the next big camp fight broke out between Maurkice Pouncey and Hebron Fangupo.

-My top source for great camp info is @ChrisG_BR who reported the following from Saturday’s practice… Brad Wing had a strong punting performance which wasn’t exactly ‘live’ but he had good hang time and no bad ones…Jordan Dangerfield picked off a Landry Jones pass… My God. Bryant with such an athletic catch… Lots of positive comments on Vince Williams.

-If you haven’t figured it out already, the two men above are excellent camp follows. A couple of others are @PGHJohnPhillips who writes for Behind the Steel Curtain and @dlolleyor who writes for the Observer-Reporter. Both give great thoughts.

-Sounds to me like Vince Williams isn’t going to give up his linebacker spot so easily to rookie Ryan Shazier. Realistically, it isn’t going to happen, but Williams is proving he can perform in goal line situations and will be a special teams’ guy as well.

-While the number two quarterback situation is a given with Bruce Gradkowski, the number three is up in the air because neither guy is doing a whole lot very well. That doesn’t bode well for Brendon Kay who needs to be significantly better than Landry Jones in order to make the roster.

-Check out my other piece today on Mike Adams too.

Love Kay, as I’ve seen a ton of him watching UC games… but he’d have to be pushing Gradkowski to make the team… He doesn’t just have to be better than Jones, he has to look like there’s some kind of starter/solid #2 potential.