After missing the first four games of the season due to a suspension for multiple drug testing failures, the Steelers’ Martavis Bryant returns to the field next Monday night in San Diego. Even without Ben Roethlisberger, his presence on the field will make things that much more difficult for the Chargers. That said, is Bryant placing unnecessary pressure on himself?

For everyone who doubted me one thing you don't know about me is that I love proving people wrong and having the last laugh at the end!

…But he also needs to live up to what is saying too.

In an interview with the Trib’s Mark Kaboly, Bryant laid out the following, “I am confident that it won’t happen again,” Bryant said. “My issues are behind me and now I am going to move forward with my career and be a better role model for the kids and continue to work. I really learned a lot about myself and how to keep myself out of certain situations that will get me in trouble.”

You’ll have to forgive me if I sound cynical but I’m pretty sure we’ve heard this before from pro athletes. “It won’t happen again” and “need to be a better role model” and “keep myself out of certain situations” are all bits taken from the same playbook. But then again, what else would we expect Bryant to say?

Personally, I’d rather he say nothing. I would much rather see Bryant do all of his talking on the football field but that’s not how things work today. The idea of today’s professional athlete being quiet is not popular. Just ask Marshawn Lynch about not talking to the press. Still, Bryant has said his piece and felt obligated to do so and that’s fine.

The only problem for Bryant now is backing up his statements.

When you  say “It won’t happen again,” it sure as hell had better not. That comment right there is as good as going ‘all-in’ on one more hand of blackjack when you have stacks of chips. What Bryant stands to lose is not just ten more games to suspension but he’ll lose the faith of the fan base as well. Steelers’ fans can be a forgiving bunch when it comes to one-time things.

Ask for more than a second chance though? Good luck with that. It’s fitting that Bryant also revealed that while getting help with John Lucas, he also spoke with Roethlisberger each and every morning. If anyone knows how to deal with adversity it’s him. My guess is that his maturity will go a long way towards helping Bryant.

In the end, Bryant may well prove himself to be right. I sure as hell hope he does. He’s a freak athlete who can do amazing things on a football field and he can immediately make this team better. Sometimes people need pressure on them in order to perform well and Bryant may well fall into that category.

Steelers’ Bryant Putting Pressure On Himself to Do the Right Things was last modified: October 5th, 2015 by steeldad
#steelersBen RoethlisbergerMartavis BryantPittsburgh Steelers 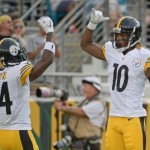 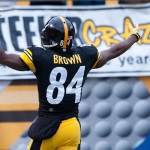