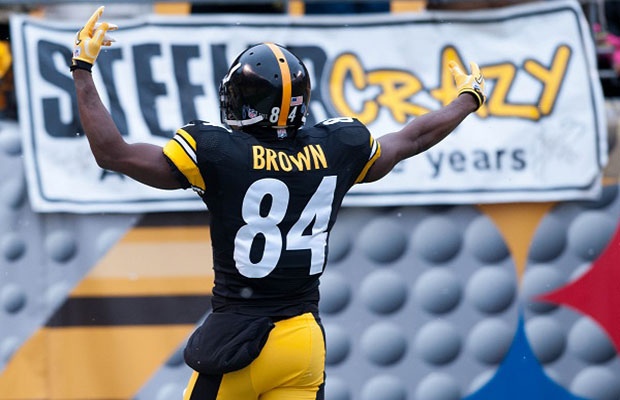 Wide receivers in the National Football League have often been likened to the “divas of the gridiron.” Some of that comes from their penchant for celebration or their flashy style but it can also come from ego. The Steelers’ Antonio Brown is one of the hardest working guys in football and that’s something that any fan can appreciate. But he also has a little bit of ‘diva’ to him and that’s not necessarily a bad thing. In his case, I believe it actually drives him to be better.

With Ben Roethlisberger on the sidelines last week, it was only natural to figure that Brown’s numbers would suffer. While he reached five total receptions, he fell short of the 50+ yards with those five catches we’ve all become accustomed. Brown also dropped a pass in the end zone from Michael Vick that most certainly would have put the Ravens away. Was it a tough catch? Yes it was but as the best receiver in the game, it’s a catch we and he, expects to make.

Therefore it wasn’t a surprise when I heard that Brown didn’t even bother to shower following the loss. He immediately dressed and stormed out.

Initially I really thought the move to be selfish. If he was mad about the streak ending then fine but you don’t walk out on your teammates. As the days have gone by I’ve come to realize that this wasn’t just the diva in Brown. This was pure frustration because he knows just how important Ben Roethlisberger is to his success as a receiver. Brown is what he is and who am I to blame him for that?

Michael Vick had decent numbers in his first start for the Steelers but if you watched what was happening, he wasn’t as good as the numbers indicated. To be fair, he didn’t turn the ball over and ultimately did what Todd Haley asked for but there were plays left on the field and Brown knew it.

Vick is notorious for making one, maybe two reads before ultimately taking off on the run. There were several times where Brown, Heath Miller and Le’Veon Bell were open but Vick had already decided to run or was sacked.

Steelers’ QB Coach Randy Fichtner was asked about the relationship between Brown and Roethlisberger during the preseason. Fichtner said, (and I’m paraphrasing here) “their ability to communicate with each other is incredible. There were many times when they would see the same thing and would just go out on their own. Next thing you know Ben hits AB for 15 yards and a first down and that wasn’t even the play call.”

That should give you a pretty good idea of why Brown is frustrated.  He knows he can’t operate the way he normally does with Big Ben on the sidelines and that means his numbers suffer as well as the chances for his team to win.

I’ll cut Brown some slack while Big Ben is out simply because I see why he’s frustrated. He cannot let that affect how hard he plays though because then everyone else suffers as well.

SCB Steelers Voice of the Fan Poll: Who Gets the Most Blame for the Loss to Baltimore?

I say get with it we are playing football here Vick is far more superior in football knowledge than Haley. The simple thing is he has been at it much much longer. So quit treating him like he just started yesterday. I am going to say it again we do not run some sort of quasi sophisticated operation here. and it doesn’t take years to catch on. let these young men go out and play some ball. No one except for some in the Steeler nation are ever going to confuse Haley or Tomlin with genius coaches [they are not]. I say go out play some lights out ball and quit this crap that an 11 year vet may not get it. Holding back or playing not to lose isn’t the way to approach games. I say pin your ears back and go out and kick some a$$. I can see why Brown is mad if these coaches are scared go get em some dogs but for pete’s sake at least leave it all on the field.