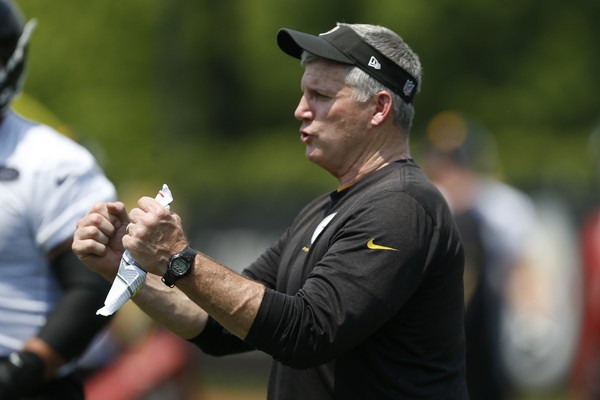 If you ask most Steelers’ fans and quite frankly, anyone with a decent knowledge of football they’ll tell you that Mike Munchak has been the most valuable assistant coach the team has had in recent years. The Hall of Fame player and former Head Coach of the Tennessee Titans appears to be headed back to the Steel City after the Denver Broncos agreed to make Vic Fangio their new head coach. In all likelihood that takes Munchak out of any further consideration for head coaching jobs.

All teams must cope with the loss of their top assistants. It’s part of the nature of the beast in college and pro football. But Munchak’s work with the Steelers’ offensive line was well above the line. He took a unit that was often inconsistent in run blocking and struggled to protect the quarterback and made them into one of the top two or three units in the league.

Consider that he helped mold Alejandro Villanueva, a former receiver for Army, into a Pro Bowl left tackle. The progress of the former Army Ranger has been nothing short of miraculous. While that story has been fairly prominent, what about the progress he’s made with Matt Feiler? This is a guy from a small Pennsylvania school who found himself starting most of the season at right tackle and doing a damn good job of it too.

If in fact Munchak is returning, it’s at an extremely important time. Longtime Steeler Ramon Foster is unlikely to return at left guard. Marcus Gilbert has missed as many games as he’s played the last two seasons and could be looking for work elsewhere. That means Munchak will need to transition players into those roles. Feiler could move down to guard with Chuks Okorafor and Jerald Hawkins vying for the right tackle spot. Or B.J. Finney could slide into guard spot leaving Feiler to compete with others for those all-important backup roles.

Those may seem like minor moves in the grand scheme of things but not to those of us have paid attention to the progress of this offensive line. Munchak’s return would be a real positive development in offseason currently filled with one disappointment after another.

Why in the Hell Can’t the Steelers...