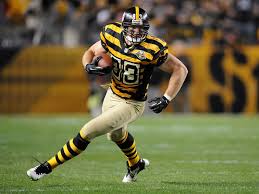 Much like we could with the report on the quarterback position, we can pretty much pencil in the top two guys at the tight end spot. Heath Miller will be your starter and Matt Spaeth will be his back-up. The only question regarding Miller is whether or not he can return to the form he displayed prior to his severe knee injury late in the 2012 season.

Miller showed flashes at times last year but also looked more pedestrian at times too as he dropped balls that he normally would have caught. With the general rule following severe knee surgery being that a guy doesn’t recover fully for one full year, we’ll go ahead and plan on Miller returning to his old self.

The Steelers have always liked Matt Spaeth and that has far more to do with his blocking than his pass catching. There’s no question the team missed his presence in Todd Haley’s two and three tight end sets. He does an excellent job of setting the edge and controlling his man at the line of scrimmage, but as a receiving threat, he is average at best.

Because Mike Tomlin has typically kept four tight ends on the roster, the battle is really for two more spots among four men. The advantage belongs to David Paulson who enters his third season and fifth-year player Michael Palmer. The other two vying for a roster spot are seventh-round pick Rob Blanchflower and undrafted free agent Eric Waters.

Paulson has been a disappointment in my opinion. With Haley’s multiple tight end sets (and Speath’s injury), the opportunity for him to prove himself was there for the taking. He had a big moment early in the season last year when he caught a Ben Roethlisberger pass and made his way down the field in Cincinnati only to fumble the ball, and a sure scoring opportunity, away to the Bengals.

Receiving was supposed to be his strength but he has been average there while his blocking has been even worse. Paulson is repeatedly beaten at the point of attack and is often seen getting pushed back rather than moving forward. I think it’s a real possibility he could be in some trouble this summer.

In four NFL seasons, Michael Palmer has 22 career receptions. One of those 22 was caught while a Steeler. At 6’5″ 258lbs, I would expect Palmer to be more of a factor at tight end, but he makes more of a living on special teams. While that is important, I don’t know that will clinch a spot on the roster.

The final pick of the 2014 NFL Draft for the Steelers was UMass tight end Rob Blanchflower. At 6’4″ 256lbs, he has the prototypical size the Steelers like at the tight end position. I think Blanchflower could have been a little higher rated coming out of college were it not for injuries and that’s the one thing that could ultimately be his demise.

As a player, Blanchflower is an excellent blocker who ‘gets after it’ and uses his legs and hips to leverage the defender. While not an overwhelming threat in the receiving department, he does catch the ball well. He isn’t going to make anyone forget Heath Miller because he doesn’t separate well from defenders or make anyone miss necessarily but he could be a solid third-tight end.

In three seasons of play at Missouri, Eric Waters had a total of 14 receptions and two touchdowns. He has good size at 6’5″ 245lbs but let’s be real here; Waters is a long shot to make the roster. He has very little on his resume to make us think otherwise.

My gut feeling is that along with Miller and Spaeth, Paulson and Palmer will return but if Blanchflower can remain healthy I believe he’ll overtake either Paulson or Palmer for a spot. At the very least, he could wind up on the practice squad, but I just have a feeling Blanchflower finds a way to unseat one of those guys.

As with almost every position now. The question is have we been able to reload through the draft?? And the same answer keeps coming back no/ yes/ maybe well we don’t really know , cause no one has done anything yet. The only thing we really know is that this team will only go as far as Big Ben can carry them. Everything else is an unknown!

Everything is unknown for the most part Bob, you’re right. Our duty is to do our best to at least see if we can predict what will be known.