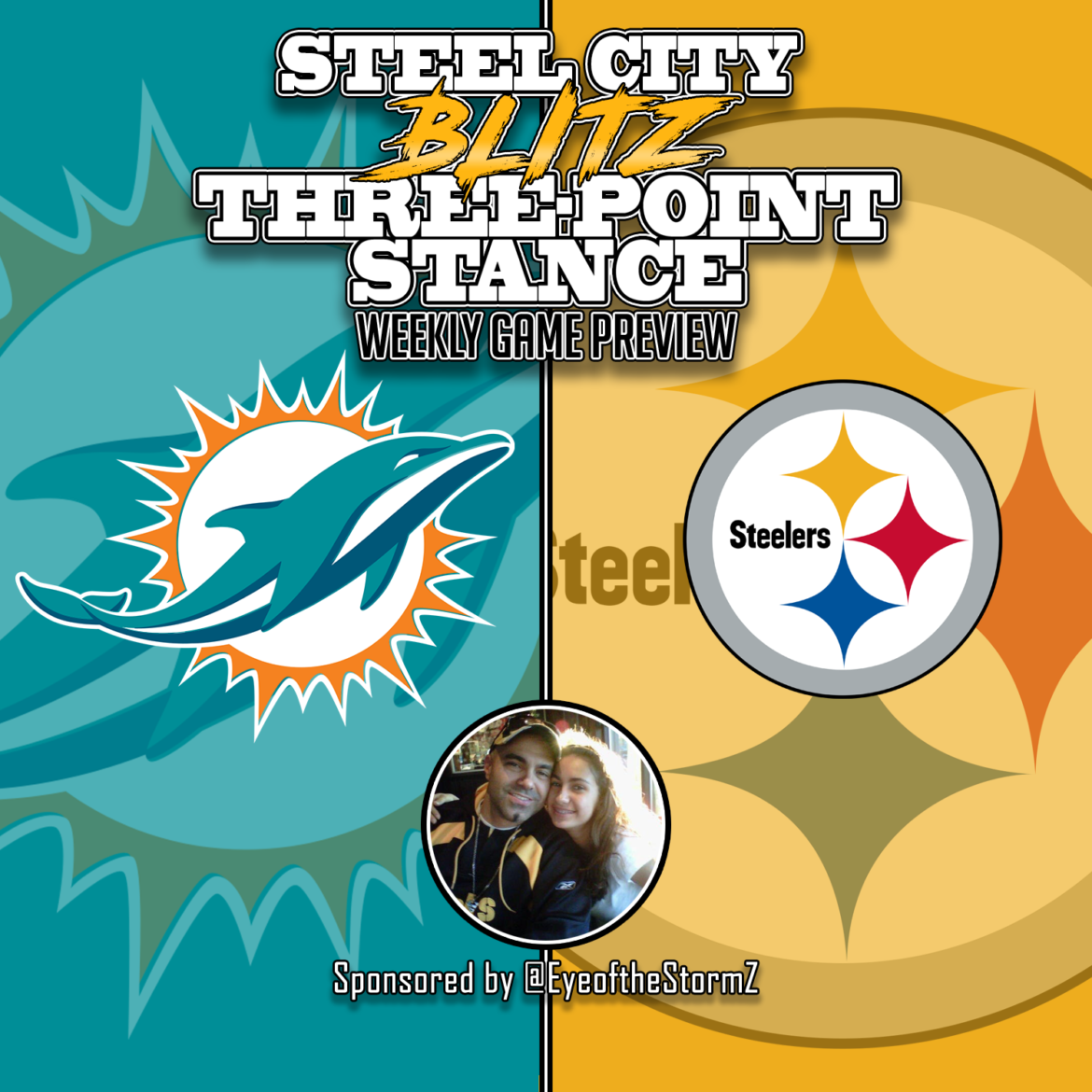 This is the Steel City Blitz Three-Point Stance. Your quick-hitting reference guide to everything you need to know about the Miami Dolphins and Pittsburgh Steelers in this week eight matchup. The TPS is sponsored by @EyeoftheStormZ.

What: Miami Dolphins 0-6 at Pittsburgh Steelers 2-4

Weather: 59 degrees and clear at kickoff.

Last Week: The Dolphins led the Bills into the second half in Buffalo but ultimately fell 31-21. The Steelers enjoyed their bye week.

This Week in the AFC North: Baltimore BYE, Cleveland at New England, Cincinnati at LA Rams

What You Need to Know: The Steelers are 18-12 all-time following a BYE week… Mike Tomlin is 8-4 (3-1 at home) following the BYE… Pittsburgh is 47-24 all-time on Monday Night Football… They are 26-5 at home and are 3-2 in such games against the Dolphins… Tomlin is 14-2 on Monday Night Football in his career… Devlin Hodges’ win in LA was just the fifth time in 26 games that a Steelers’ first time start was victorious… Last time the Steelers and Dolphins hooked up on MNF was 2007 and that game ended up a 3-0 win for Pittsburgh as the game was played in a downpour. It remains the lowest scoring game in MNF history.

What’s at Stake: If you’re the Dolphins, getting your first win of the season in primetime against the Steelers would be pretty damn awesome. If you subscribe to the theory that they are ‘tanking’ then there’s absolutely nothing to worry about. For the Steelers it’s the beginning of a three week run of home games where the Steelers must win 2 of 3 if not sweep all three to keep any postseason chances alive.

Get On It Early.  Whenever you’re playing a team like this that has yet to win and has considerable doubts that it can win, the best thing you can do is step on them early and often. Whether it’s the Steelers’ defense that gets early turnovers, special teams making a big play or the offense getting early scores, the sooner the Steelers put the Dolphins down the better. In situations like these, the longer you let a bad team hang around the more confidence they gain as the game goes on. Early success for the Steelers goes a long ways towards victory.

Rudy’s Growth. The main goal of the game is to win regardless of how that happens but I want to see some growth in Mason Rudolph. I want to see him go through his progressions rather than go from his first option straight to the checkdown. In order for that to happen the offensive line has to protect of course but Rudolph has to be patient and let his receivers run their routes and get open. The reason I need to see the growth is because much better opponents are coming and he’s going to have to be able to use all of his receivers. Let’s see what Rudy does on Monday night.

Replacing Tuitt. No defender had been playing better than Stephon Tuitt and now he’s lost for the season. There is not a guy on the roster who can replace him but rather, there will be a number of guys who must be up to the task. Tyson Alualu is likely to get the call first especially on early downs. Javon Hargrave will be instrumental as a pass rusher and L.T. Walton is likely to get some snaps too now that he’s back. This game will likely not be much of a marker in terms of the overall success of replacing Tuitt. That will come in future contests but that doesn’t mean they can ‘take the evening off’ either.

Predictions: I suspect we’ll see large doses of James Conner and company early with Miami struggling so much against the run. Finding success there will open up the passing game as well where Rudolph should have success. Defensively, I expect the Steelers to create havoc in front of Ryan Fitzpatrick who will turn the ball over and likely more than once. The Steelers realize the importance of these three straight home games and are likely to get off on the right foot.