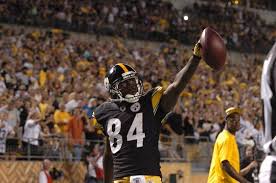 Antonio Brown laid it down yesterday in response to Emmanuel Sanders’ comments.

The Steelers get back at it today in Latrobe at 255pmET. Here is the official steelers.com training camp guide.

-I’m guessing most of you saw the ‘return fire’ from Antonio Brown to his former teammate Emmanuel Sanders but here it is again.

-Good friend @ChrisG_BR had several good observations from yesterday’s practice… Appropriate Steelers use two stacked trash cans when QBs work on corner fade for their ‘short’ receivers… Ben was the first to nail one in trash cans… TE Rob Blanchflower was on the sidelines in a walking boot… Markus Wheaton managed to field a punt with four balls in hand. One ended up between his legs. No ill effects of broken finger.

The Trib’s Mark Kaboly had these camp notes from yesterday… Daniel McCullers having his best practice of his short career… Arthur Moats looked real good in OL pass blocking drills as he won every time… Troy picked off a Landry Jones pass as the pressure was heavy from Shazier and Timmons… Jordan Dangerfield making plays once again… Free agent TE Eric Waters is having a great camp and could unseat David Paulson or Michael Palmer.

-Even with the goings-on of training camp, the biggest story on Wednesday was clearly the announcement that the organization is going to officially retire Joe Greene’s number 75. He becomes just the second player in the team’s history dating back to 1933 to have such an honor bestowed upon him. The number 70 jersey of Ernie Stautner was retired many years ago.He played for the Steelers from 1950-1963.

-William Gay told Trib-Live Radio’s Ken Laird that McCullers reminds him of the big dude from ‘The Longest Yard’ who started crying and then destroyed everyone. I believe his name was Switowski.

-Do you believe we get to see the 2014 Steelers in action a week from tonight in New York?

-I already gave you a video so don’t get greedy.