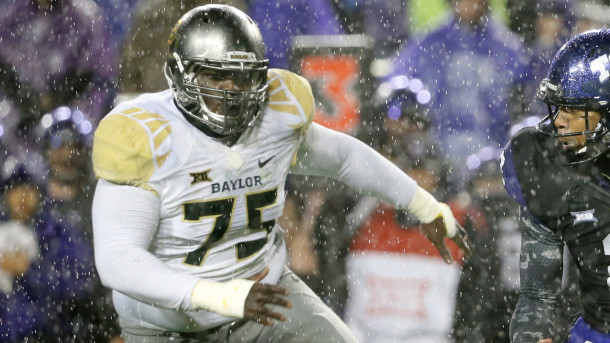 25. Pittsburgh Steelers – Andrew Billings, DT, Baylor
If it’s me, I want Karl Joseph here… but I wouldn’t hate Billings. The tie-breaker for me is 1. the Steelers have shown way more interest publicly in Billings, and 2. there’s a ton of safeties still on the board for the team to grab in round 2, but not many great defensive tackles left. Billings is nowhere near the immovable object that Casey Hampton was, but he does have an unnatural amount of athleticism for a man his size, the way Big Snack did. Joe Greene likely wanted to get an idea if this kid has enough nasty to wreak havoc from the interior the way he once did. This pick would officially spell the end of the 3-4 in Pittsburgh, if that hasn’t happened already.

26. Seattle Seahawks – La’Raven Clark, OT, Texas Tech
The Seahawks struggled to keep Russell Wilson protected for much of last year and with Russell Okung no longer in Seattle players are needed on the offensive line. Clark is one of the more athletic offensive tackles in the draft and while he has some issues especially in pass protection, I think working with Tom Cable will make him better almost instantly.

27.Green Bay Packers – Kelvin Dodd, DE/OLB, Clemson
Dodd has been getting hyped as the draft process has gone on, with some mocking him over teammate Shaq Lawson. I think this is more fitting for Dodd’s range. Green Bay could go a lot of directions in the front 7. And ILB would work if someone like Darron Lee fell, and they could move Clay Matthews back outside, but Dodd is a value pick that bolsters the pass rush, and let’s them use him in multiple positions along their defensive front.

28. Kansas City Chiefs – Michael Thomas, WR, Ohio State
This is a bit early for Thomas in my opinion but with Treadwell and Fuller off the board and with a significant need at receiver the Chiefs call Thomas’ name. He has good size (6′ 3″) and good speed and could really open up things for Jeremy Maclin on the other side of the offense. A defensive end or interior lineman is a possibility here but I think the Chiefs recognize how badly they need more threats on offense especially at the wide receiver position and Thomas fits the bill.

Billings is not first round goods period. The Steelers don’t have the personnel to run a 4-3. Most of the times you guys write some good stuff But you are off base here. I think this is going to be a very interesting draft because there are no super stars here but there’s talent. And what makes it more intriguing is next years draft is shaping up to be even thinner.

Nice twist on my words , so let me clarify. First Billings is reach in the second round let alone the first and to by-pass superior talent just isn’t what the Steelers do. Second this team’s D-line was exhausted by the end of games last year and to change to a quality 4 man front would take several years. They would be better served drafting a D-E and start rotating players to keep them fresh. I feel that we are very close to Super Bowl level talent and reaching at this point would be a mistake. This defense was making some progress last year, but to take steps backwards to prepare for the future cuts into that championship window.

I would not be that upset with Billings. His tape looks very good and if Mean Joe likes him, I do too. I keep reading the corners name from Houston though, so I am leaning that way ( the Steelers will pick him)

Ok i will admit that i knew little about Billings when i made my comment. So i did some research and here’s what i got. He’s very powerful, has a great burst then the picture becomes blurry. He tends to slow after his first burst, he doesn’t have the numbers of guys like Donald, Sapp, Mccoy ,Fairly,ect. He does have potential but it’s not a given. I can see why he has slide up the board but and but again.