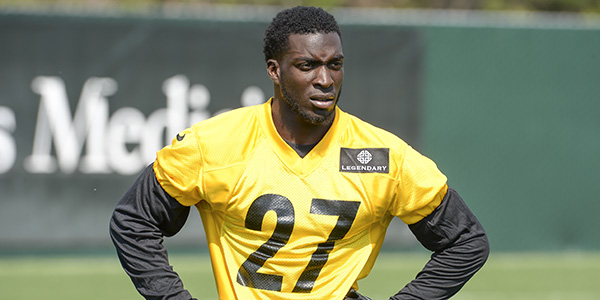 Every player on every NFL team is under the microscope by coaches regardless of whether it’s OTAs or a playoff game. But when you’re a highly-touted second round pick who has participated in all of three practices in two seasons, the focus on you is a little more intense. So far through OTAs, Senquez Golson has survived that focus and is thriving.

I’ve been told that he has been tremendous so far in the offseason and I want to again stress that this is just “football in pajamas” but the positive signs are there. Golson stuck with Antonio Brown better than any other cornerback during the recent series of OTAs and at a couple of points “brought a smile to the face of Mike Tomlin.”

The last thing I or anyone else wants to do with Golson is put the cart before the horse. Before anything else, Golson has to prove he can stay healthy and right now he’s as healthy as he’s been since he was drafted. Golson’s availability immediately makes the secondary better because it creates depth and perhaps give the Steelers the true slot cornerback they’ve so desperately needed.

William Gay has been a solid cornerback for years in Pittsburgh but his best days as a slot corner are behind him. Cam Sutton is currently spending the majority of his time on the boundary and do the Steelers really know what they have with free agent Coty Sensabaugh? This is why Golson’s health is so important.

The concern about whether a guy in Golson’s position can truly bounce back is debatable. He hasn’t played meaningful football since he last suited up for Ole Miss. He was also a highly-touted baseball player as well which points out just how athletic he is.

Based on everything I’m hearing, it’s “so far so good” for Golson which could mean good things for the Steelers.

I AM ROOTING FOR HIM