I always find it amazing how fans sometimes don’t always grasp that there is a business side of football that couldn’t be further away from the rest of it. It was reported this week that Steelers’ General Manager Kevin Colbert and Left Tackle Alejandro Villanueva often play a game of pool after practice. Naturally, fans assume they must be “talking about Villy’s on-going contract issues.” You may be surprised to learn that in 99% of situations like this, contractual issues never come up. Most players let their agents do their talking in that regard. I highly doubt Villanueva says, “Eight ball, corner pocket and if it goes in you agree to my demands” when the two play. It’s another part of football that few recognize. Players and management can get along even during contract talks.

Fearless offseason prediction: Look for the Steelers to trade one of their wide receivers. Common sense may say Justin Hunter but my money is on Sammie Coates or Eli Rogers. The Philadelphia Eagles could be in the market for one of them. Just sayin…

What a beatdown last night in Pittsburgh! I think there were more Steelers’ players at the game than weren’t there! One more to go Pens fans!

Ben and I collaborated on this piece about the numerous contractual issues being discussed at OTAs.

Free agent WR Jeremy Maclin has now left both Buffalo and Baltimore without a deal. A return to Philly remains a possibility.

Gerry Dulac unintelligible comment of the week from his chat…

TK: Has Sutton been getting work returning punts, or do they not practice that during OTA’s?
Gerry Dulac: They are in shorts, not pads

Wait… What? What in the hell kind of answer is that?

If you missed the latest episode of the Steel City Blitz Podcast Presented by 26shirts.com/Pittsburgh, then click right here!

Have a great weekend Steeler Nation! Mandatory Mini-camp is on deck next week!! 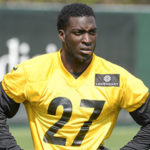