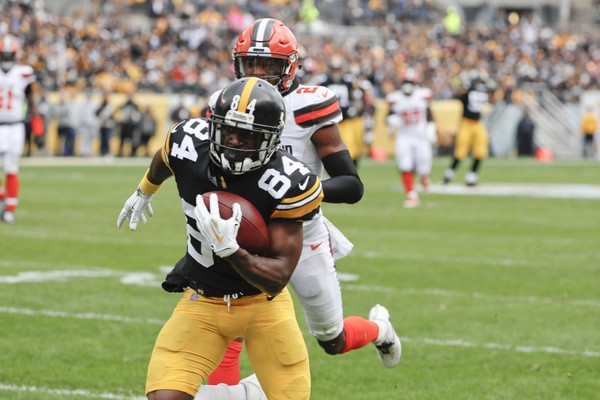 In some ways, you couldn’t blame the Pittsburgh Steelers for starting slowly today at Heinz Field. Coming off the bye week, most would have expected anything but right? But consider what weighed on these players today as they took the field just 24 hours after the horrible act of hatred in the city they represent.

We can blame the lay-off for the rust or we can blame Mike Tomlin for the lack of preparation but at some point can’t we just realize that these men we expect so much of are after all, people too? They saw the stories and the coverage of the shooting at a Jewish Synagogue just as we did and they also likely felt the weight of the city on their shoulders. For a poor performance would have only added to the misery and sadness.

But after an ugly first quarter the Steelers got the machine humming again and the Browns were suddenly left to wonder what had just happened. The Black and Gold would go on to win 33-18 and bring perhaps an ounce of happiness to otherwise awful weekend in the Steel City.

James Conner has now left zero doubt that he can be everything that Le’Veon Bell can be and maybe more. His performance today will rank as one of the great ones by a Steelers’ running back. Conner rushed 24 times for 146 yards and two scores and added 66 yards on five receptions. He averaged over nine yards every time he touched the ball today.

Ben Roethlisberger started slowly but picked it up in the second quarter. He would end up 24 of 36 for 257 yards, 2 scores and 1 interception. Antonio Brown didn’t have a huge day yardage-wise but collected two more touchdown passes to go with his six receptions.

The defense, looking so damn good in those late 1970’s throwbacks, did not collect huge numbers but was in the face of Baker Mayfield all day and limited Nick Chubb significantly in the second half. Stephon Tuitt and T.J. Watt each had seven stops on the afternoon and each recorded a sack as well. Joe Haden picked up his first interception against his former team also.

All was not perfect however. Following a safety to make it 16-6, Ryan Switzer let the free kick bounce and roll where it was recovered by the Browns. This is a “free kick” and can be recovered by the kicking team. The Browns turned it into six points (with some help of some very questionable calls) but missed the PAT. The Steelers didn’t skip a beat though answering with a score and never looking back.

No this victory was not perfect and it will do little to ease the pain of so many families affected by this weekend’s senselessness but the Steelers lifted the spirits of the city nevertheless. On this day the Steelers can be forgiven for a slow start.