Before I get to my comments on the game yesterday let me address those beautiful uniforms first. I think most of you know by now that I appreciate tradition and simplicity when it comes to the Steelers’ uniforms. Seeing those late 70’s jerseys literally gave me chills. I beg of you Art Rooney II, please bring them back as the permanent jersey!

It’s always amazing to me (and I’m guilty myself at times) of how quickly fans jump on Mike Tomlin and the team when it starts slowly. As we learned yesterday sometimes we just need to have a little bit of patience.

The slow start may have been a negative yesterday but the bigger issue was the mess that was the Steelers’ return team on the free kick. While I lay blame on Ryan Switzer and Roosevelt Nix who called for a fair catch then moved out of the way, the real culprit is Danny Smith. Your players HAVE to know that kick results in a live ball. It’s not a punt, it’s a kickoff. The mere fact that not one Steeler on that unit went to get on the ball is evidence of the fact that Smith clearly didn’t cover this with his team. Thankfully this did not cost the team in the long run.

James Conner has far exceeded any expectations I had for him. Two scores and over 200 yards of offense? What more does he need to do? Well… a big game against Cleveland is one thing. If he can have a big game in Baltimore Sunday against a ticked off Ravens team then I’ll have zero doubts about his future going forward.

Tweet of the Day… So you’re going to pay more for a guy to do things when you already have a guy doing those things for far less money?

No @MarkMaddenX they can pay him more if they chose. Just cant negotiate a multi year deal. https://t.co/gy5AbJ4Huc

Like the rest of the offense, the offensive line started slowly but then did an excellent job over the final three quarters. They completely dominated the line of scrimmage.

Easily Stephon Tuitt’s best game of 2018 yesterday. This is the type of performance that we need to see more consistently from him.

Artie Burns isn’t just in the dog house, he’s in the basement of the dog house. When Coty Sensabaugh left with an injury he was replaced by Cam Sutton, not Burns. That says a lot doesn’t it? Burns did not have one snap on defense.

Makes me wonder if the Steelers aren’t still in the market for a cornerback before tomorrow’s trade deadline. Coty Sensabaugh cannot be relied on.

Welcome back Chris Boswell! He was perfect on his PATs yesterday and also nailed his only field goal attempt as well.

I think there has to be some concern about the #3 wide receiver position on this offense. James Washington was inactive yesterday in favor of Justin Hunter. Hunter proved his worth with a nice block to get Antonio Brown into the end zone but as a receiver he is not much of a threat. I really thought Washington would be further along by now.

Rookie Jaylen Samuels had four carries for 17 yards. I think there’s a definite ‘want’ by the team to get him more involved with the offense. He’s a guy that can do numerous things from a number of different spots on the formation.

Next week is the biggest game of the season. A loss gives the Ravens the tie-breaker for the division and drops the Steelers to 2-2-1 in the division. A win gives them the inside track with just one division game left to play. Unfortunately, the remaining schedule for Baltimore is much easier than the one waiting for the Steelers.

Have a great day Steeler Nation and please keep the families of those affected by the Synagogue shooting in your thoughts. 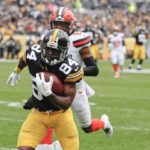 I was watching Joe Haden close. He isn’t fast or physical but he has great footwork and is really smart. I like him a lot, Cam Sutton should be picking his brain. Next week we have to plan for the Ravens stacking the box. Our game plan should be geared towards this and not wasting plays running into a wall. BTW Tomlin walked away again with all his challenges unused. In a tough physical game coming up he can no longer do this.