The WPIAL is set to meet this week to discuss how teams will qualify for the playoffs this season. Due to the ever-changing environment of the COVID pandemic, the traditional methods of determining WPIAL playoff teams will not be able to be used this season. The traditional methods, with conference standings based on Record, Head-to-Head, Gardner Points, and WPIAL Tiebreaker Points will not be able to be used because of an uneven number of conference games played for each team.

Last week, the Post-Gazette’s Mike White suggested that the WPIAL Football Steering Committee essentially function like the NCAA Selection Committee and choose the teams that will make the playoffs. This is certainly a viable option and may be the most fair and equitable to teams that have had cancelled games. However, there are also mathematical formulas similar to those the WPIAL has used in the past or those used by other districts which could be considered.

This system will obviously not work for the 2020 season, because teams may have a different number of conference games. The 100 points per victory factor would give a distinct advantage to teams that played more games. What is to say that a team with a 4-2 conference record is any better or worse than a team with a 2-1 conference record (identical winning percentages but one team played twice as many games). In order to mitigate this, there are two possible options that the WPIAL could consider.

The current formula for Gardner Points is somewhat superfluous in giving out the 100 points for each victory because the formula is only used when teams are tied in the standings and head-to-head can not break the tie. The only way for this to happen (under normal circumstances) is if teams have identical records and thus the same number of wins. However, the 100 points for a victory does have its source in an older version of the Gardner Points Formula, which is worth considering here. The formula that was in place previously gave 100 points for a victory and 50 points for a tie and also included a factor based on games played:

Now, obviously some amendments would need to take place in order to make this applicable for 2020. With the implementation of overtime, there are no longer ties in high school football. This would be my recommendation for using what I am calling the Original Gardner Points (OGP) formula:

Adding in the adjustment for Games Played to the Gardner Points calculation would make a lot of sense and level out the differences between, say, a 2-1 team and a 4-2 team. The WPIAL typically only counts games against conference opponents but I think for the special circumstances of this season, it is worth counting non-conference games within the classification. If a team beats a top team from another conference within their classification, I think they deserve some credit for that victory in the determination of which teams should make the playoffs. (For instance, Peters Twp’s win over Penn-Trafford should count towards Peters Twp’s playoff standing.)

This proposal is very similar to the Original Gardner Points proposal with one slight adjustment. Instead of only considering games against opponents within the classification, all games played against WPIAL opponents are counted towards the formula. In order to account for the differences in classifications, a “Power Point Matrix” is used. Currently, PIAA District 6 uses a Power Point Matrix that is very similar to the Gardner Points in that it is based around 100 points being the median. Here is the D6 Power Point Matrix: 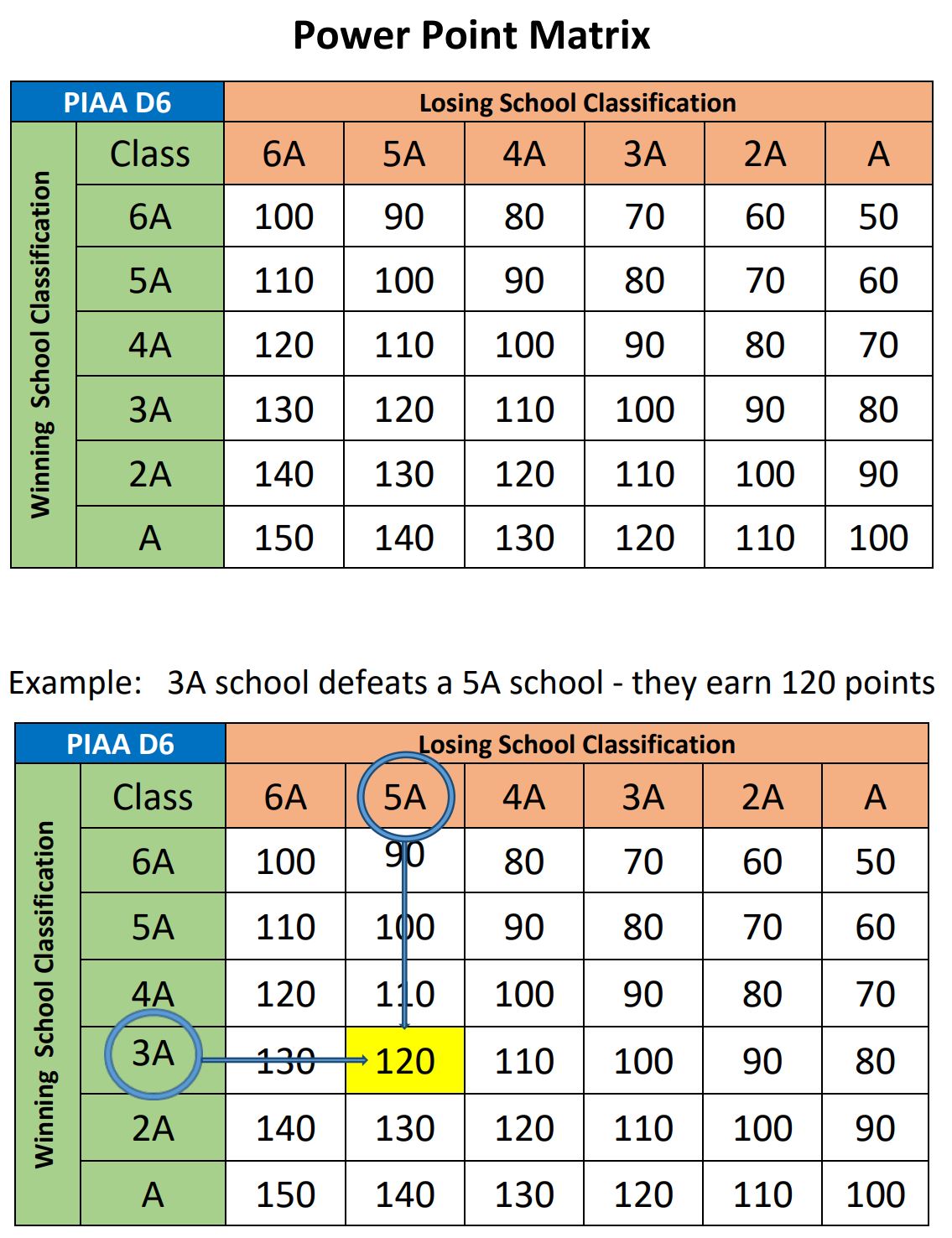 My amended proposal for Garder Points-Plus (GP+) would look like this:

Let us not lose sight of the end objective here – to select the 8 best teams to make the WPIAL playoffs (in every class except 6A where only 4 teams will make the postseason). In 2A, there are 4 conferences. Typically this would mean that the WPIAL would put the Top 2 teams from each conference in the playoffs. In the other four classifications (5A, 4A, 3A, 1A) there are three conferences. In a typical year, the WPIAL would take the three conference champions and second place teams along with two of the three third place teams to make up the 8 playoff teams. In the past, this system of only considering 3rd place teams for Wild Cards was called into question (specifically in 2016 when 7-2 Beaver missed the playoffs while 5-5 South Park made it). For an example of how these proposals compare, I used the current Class 5A standings:

Based on the recent system of selecting 8 teams by taking the top 2 from each conference then two third-place teams as wild cards, the 5A playoff teams would be:

Here is a table listing the teams as they would appear for the playoff rankings. The top 4 would receive playoff home games. The 4th-8th teams would play on the road. Woodland Hills would edge Penn Hills for the last playoff spot based on head-to-head result. Upper St Clair, despite having an equal number of Gardner Points and more WPIAL Tiebreaker Points than Woodland Hills, would miss the playoffs because they are 4th in their conference and not 3rd. This is the potential inequity that I discussed earlier with only considering 3rd place teams for the Wild Cards. 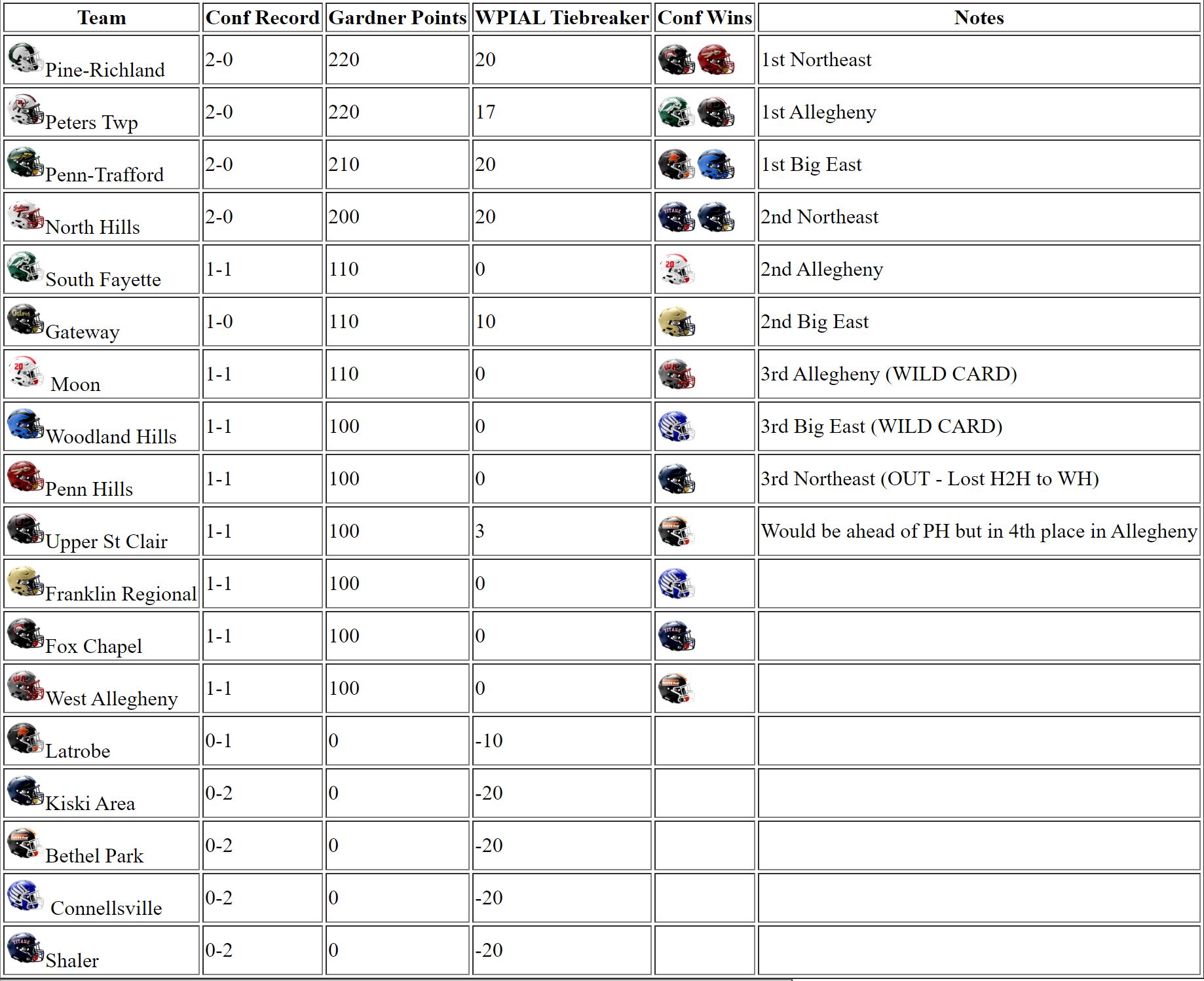 In the “Original Gardner Points” system suggested above, teams receive Gardner Points based on all of their games against competition in the same classification. This means non-conference game between 5A opponents count towards the standings. The OGP are then factored by the number of games played. I sorted these standings by OGP instead of by order of finish within a conference. There are some significant changes. Only one team from the Northeast Conference (Pine-Richland) is now in the Top 8 teams that would make the playoffs. With Penn-Trafford’s non-conference loss to Peters Twp now counting in the standings, Peters vaults to first and Penn-Trafford drops below Gateway in the ordering of the standings. Additionally, Franklin Regional and West Allegheny jump into the Top 8, replacing South Fayette and North Hills. 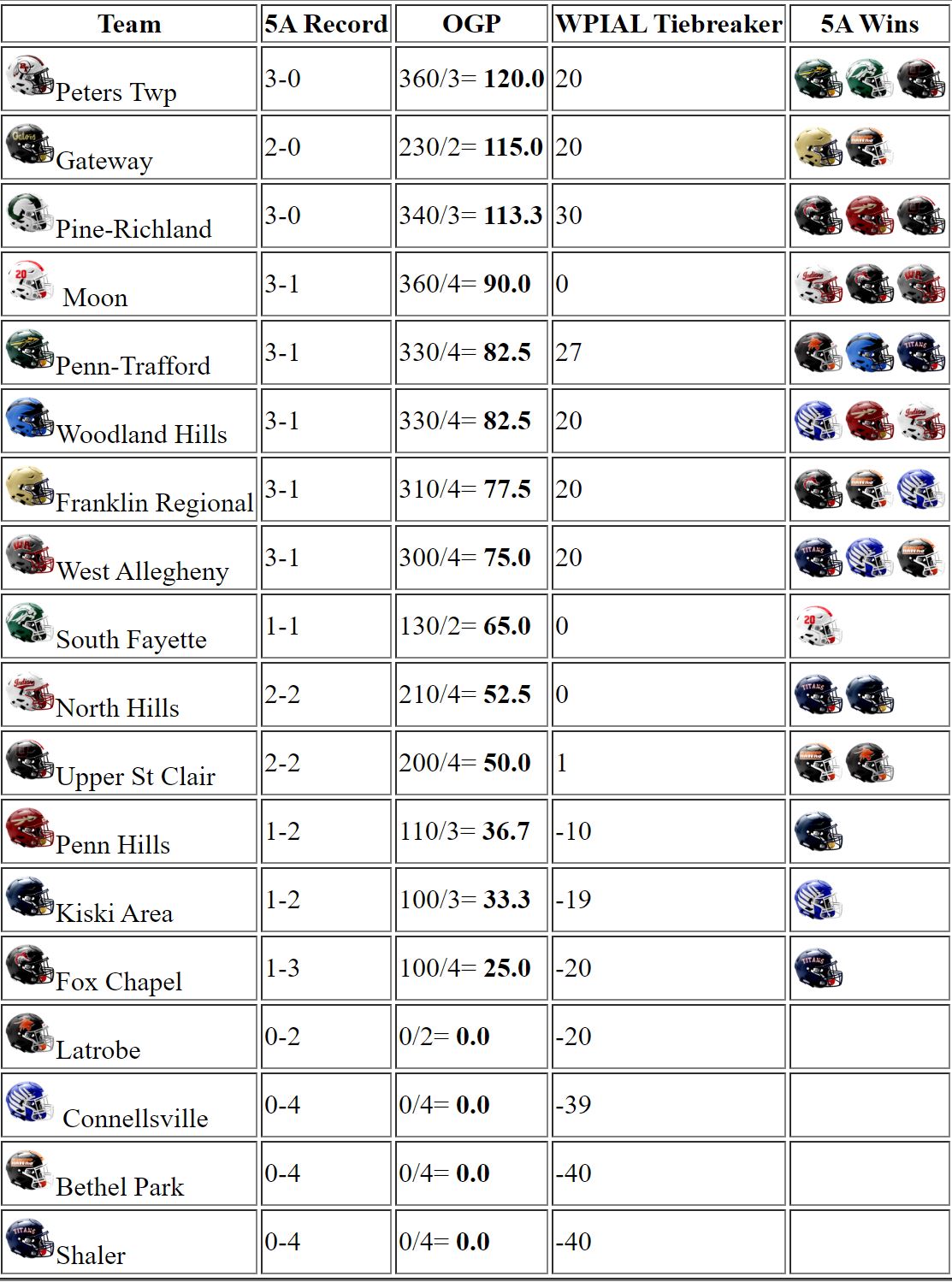 There were only three games this season between 5A teams and teams from other classifications. Penn Hills lost to North Allegheny and South Fayette lost to Chartiers Valley. The one game that impacted the standings was Latrobe’s victory over 3A Mt. Pleasant. Instead of that victory counting as 130 GP for Latrobe (100 for the win +30 for Mt Pleasant’s 3 wins), it would count as 110 (80 for the win over a team 2 classes down + 30 for Mt. Pleasant’s 3 wins). This extra win for Latrobe also helped Penn-Trafford and Upper St. Clair (who defeated Latrobe). This formula would play a potentially bigger role in some of the other classifications where there are an odd number of teams so there are more cross-classification games played. The Top 8 spots are the same here as they were in the OGP standings with the first change being Upper St Clair hopping North Hills and South Fayette. 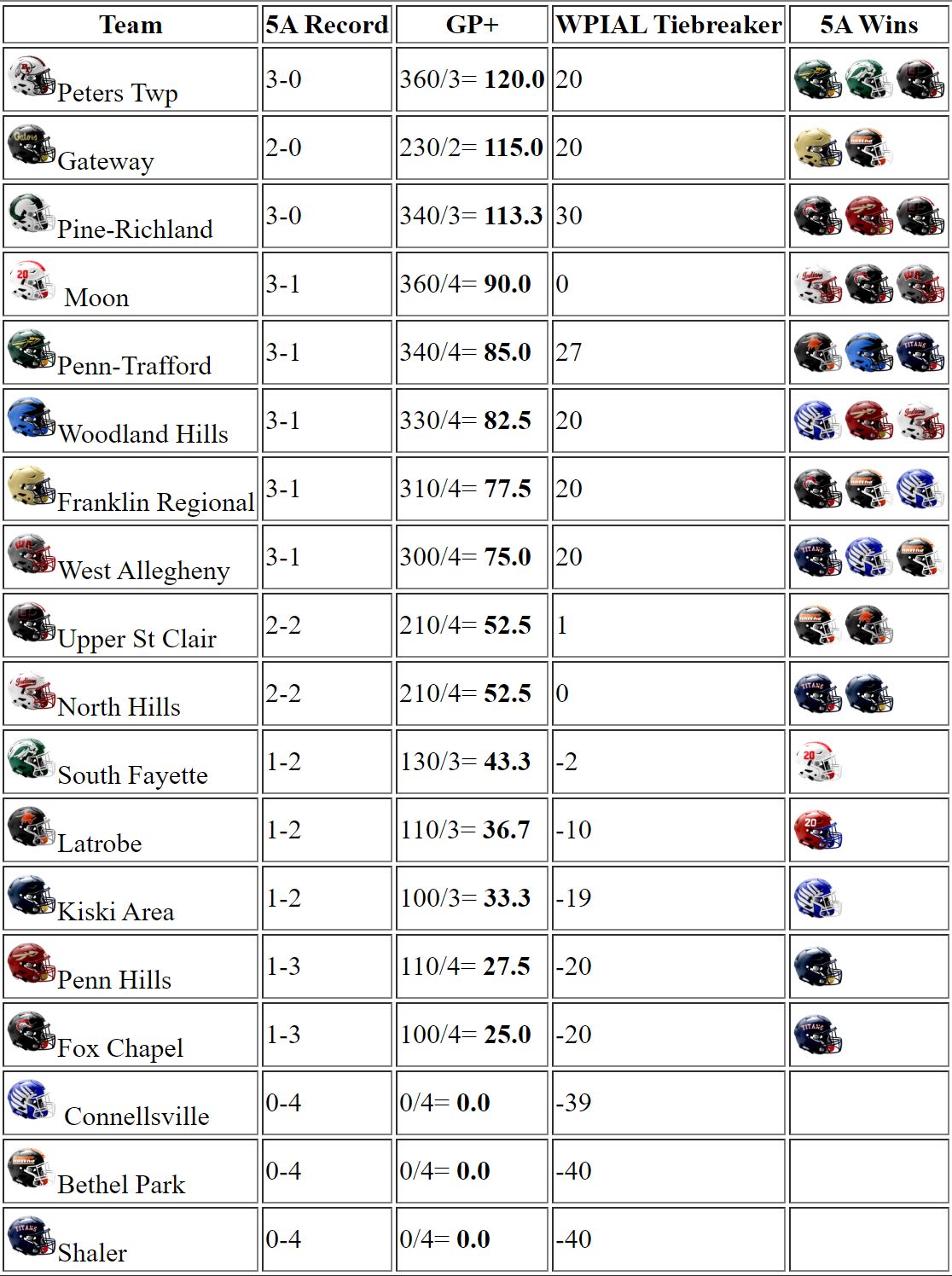 In conclusion, there is no perfect system for determining this year’s playoff teams. However, a mathematical formula based on results that factors in strength of victory as well as controlling for number of games played seems to be a very viable solution. I have not run the standings for other classifications, and obviously the 5A results are somewhat limited based on the fact that most teams have only played 2 conference games so far. The conference standings will continue to evolve as we head towards the postseason. I am hopeful that the WPIAL will come up with a solution for determining the playoff teams that is relatively easy to track and explain. Keep an eye on our WPIAL Standings Page as we will keep it updated with any changes the WPIAL makes in determining how playoff teams will be selected.