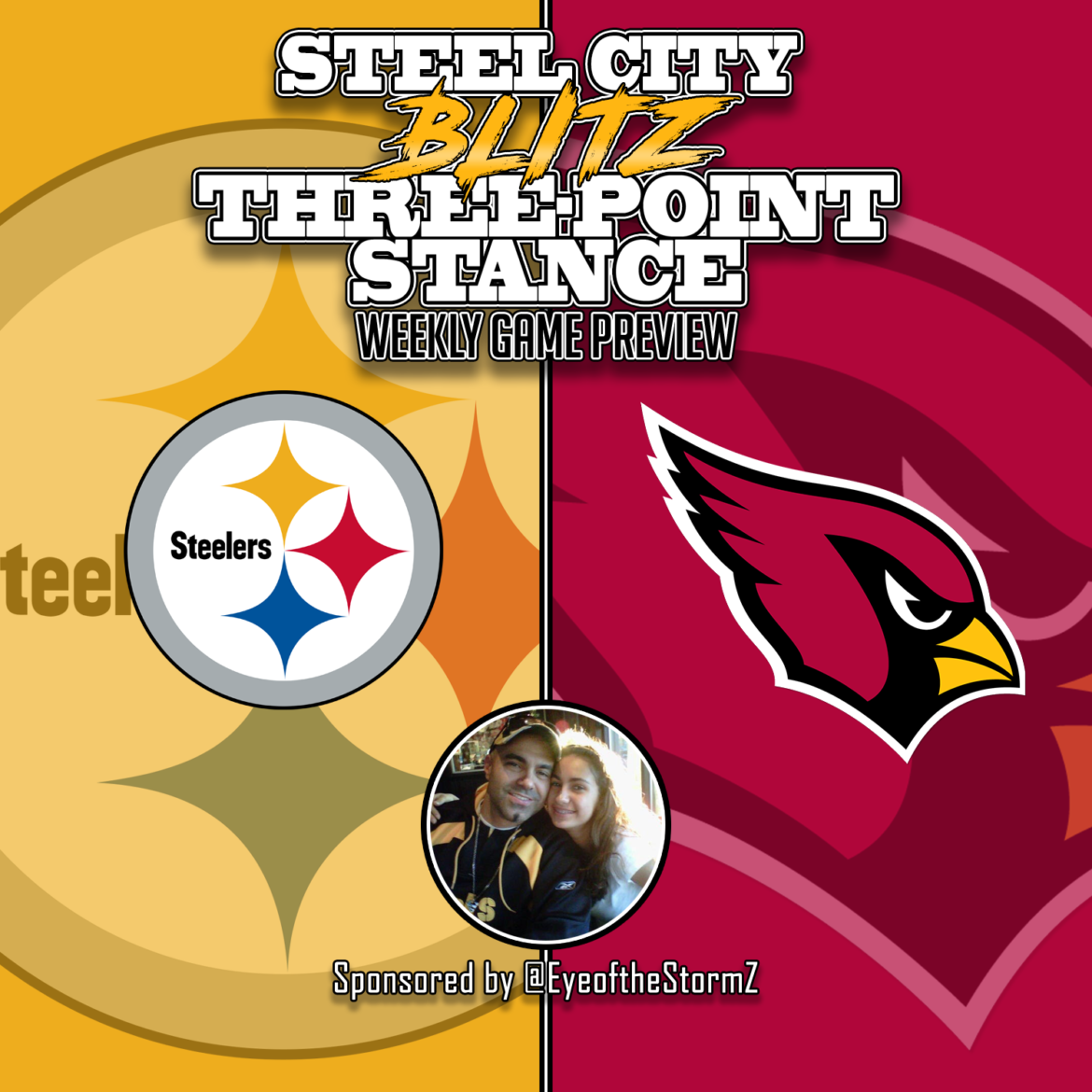 This is the Steel City Blitz Three-Point Stance. Your quick-hitting reference guide to everything you need to know about the Pittsburgh Steelers and Arizona Cardinals in this week 14 matchup. The TPS is sponsored by @EyeoftheStormZ.

Last Week: The Steelers beat the Cleveland Browns 20-13 in Pittsburgh while the Cardinals were beaten by the Rams 34-7 at home in Arizona.

TV Coverage in Your Area: Check out the506.com for coverage in your area!

This Week in the AFC North: Baltimore at Buffalo, Cincinnati at Cleveland

What You Need to Know: The Steelers have played four of the five teams in the NFL that are currently 10-2 and that accounts for four of their five losses… Pittsburgh is 6-0 this season when they lead after three quarters… The Steelers are 1-2 versus the NFC West in 2019… This will be the first time in 12 games that the Steelers will play indoors this season… Pittsburgh has the second best road winning percentage since 1993 (.552)…

What’s at Stake: The Cardinals are essentially playing with house money as they have a snowball’s chance in hell of making the postseason. There are already rumbles in the desert that they are in “no hurry to win more games” and thus improve their draft position. For Pittsburgh, they have to keep winning to maintain their hold on a playoff spot. They’ll no doubt pay attention to the Oakland-Tennessee game as well as the Baltimore-Buffalo contest. This much they know; if they win out they’re in the playoffs.

Make a Trip to McDonald’s. Last week we finally got to see tight end Vance McDonald get involved in the offense a bit more than he had been previously. This week, I expect to see him have an even bigger impact against an Arizona team that has surrendered a league-high 13 touchdowns to opposing tight ends. They’ve also given up 953 yards receiving to tight ends which is over 100 yards more than the second worst team. While McDonald should be a primary target, don’t discount Jaylen Samuels who could be utilized from a wing or tight slot position. He would be treated similarly to a tight end and could create matchup problems for the Cardinals as well. For the record (and you fantasy geeks), no defense has given up more fantasy points to NFL QBs than Arizona.

Win the Red Zone Battle of Attrition. The Pittsburgh Steelers rank DEAD LAST in red zone offense in 2019. The Cardinals aren’t much better ranking 29th in the NFL in the same category. Believe it or not this is very likely where the game will be worn or lost. If it comes down to a battle of field goals then both sides are again at a stalemate. Chris Boswell has missed two of 25 attempts. Arizona’s Zane Gonzalez has missed three of 29 attempts. Therefore I’m of the mind that if the Steelers can score touchdowns and use their defense to force the Cards into field goals then that goes an incredibly long way towards a Pittsburgh victory. This is all easier said than done of course but as bad as the Arizona defense has been I’m giving the Steelers an edge here.

Overcome the Road Deficiencies. The Steelers are averaging five sacks at home and are averaging just 1.5 on the road. They are not turning over the ball on the road nearly as much either and their success at getting off the field on third down goes from about 30% in Heinz Field to over 40% in other stadiums. We can talk all we’d like about how State Farm Stadium will likely be decked out in Black and Gold making it feel like a home game but that isn’t always enough. With their playoff chances hanging in balance, the Steelers need to increase those numbers in a positive direction. By doing this, it will help the offense but it also gets the defense off the field more often and has them in better shape in the fourth quarter.

Prediction: I gave the Browns far too much credit last week in thinking they’d have just enough offense to beat the Steelers and I was way off. This week has those typical trappings like a team coming off a big divisional win, a team coming off of a huge loss and one team playing for everything while the other plays for next season. Seems too easy to suggest the Steelers are ripe to be upset and the other concern is Duck Hodges. Has all of this week’s attention gone to his head? Has he been able to put in the amount prep time necessary with everyone wanting interviews? I get the feeling he’ll be just fine. I think the Steelers get off to another slow start but I think they also find some offense too.

Five Predictions for the Pittsburgh Steelers’ 2020...