I’m going to go ahead and give you the tweet I put out yesterday so you have some context to what I’m about to say in regards to James Conner.

James Conner is a terrific, inspirational young man who works hard and plays hard and has overcome much in his life. The reality is however that he cannot stay healthy and in this business that trumps everything else. #Steelers

One of the reasons I enjoy Twitter is that it creates learning opportunities for me. I’m not in any way pulling back from what I said, but some good points were made about the overall lack of true “number one running backs in today’s game” period. Guys like Delvin Cook and Todd Gurley are terrific backs but like Conner, they’ve spent a lot of time on the sidelines. The days of having an Emmitt Smith or Eric Dickerson are over and when Adrian Peterson retires I think that generation goes with it. But here’s the problem. Running backs still want to be paid like “number one running backs” and I don’t think that’s possible any longer. Would any of you actually pay James Conner ‘RB1’ money right now? There’s no way I would and I think he’ll have a hard time getting that money on the open market. Two RB systems are the way to go today and if Conner wants to be part of that he can but as Mike Tomlin often says “Availability is the best thing a guy can have.” And Conner just doesn’t have it.

Ben and I cranked out the Steel City Blitz Steelers Podcast presented by 26shirts.com/Pittsburgh last night. We had a little fun at the Browns’ expense and discussed a lot about Duck Hodges, Mason Rudolph, James Washington and a whole lot more.

ACTUAL Tweet of the Day… Glad we could help!!

NOTES… As most of you know Conner will not play Sunday… I do not believe that JuJu will either… Outside of those two, the rest of the team is pretty healthy… Flu bug hitting the Cards right now as has been the case with several other teams.

A guy that played really well on Sunday was defensive tackle Javon Hargrave. He’s a guy that we loved in our draft prep  a few years back and we still think highly of him today. The sad reality is that I don’t believe we’ll see him back in Pittsburgh in 2020. He will more than likely get offers that far exceed anything the Steelers can propose and that’s disappointing. He’s been a very good player and a good guy off the field too. 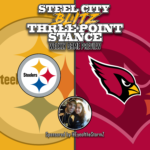