This is the Steel City Blitz Three-Point Stance. Your quick-hitting reference guide to everything you need to know about the Patriots and Steelers in their week 15 match-up. It is sponsored by Nail the Number: The Fight Against Cancer.

Weather: 44 degrees with a 50% chance of showers

Last Week: The Patriots lost 34-33 to Miami on the final play of the game. The Steelers lost in Oakland 24-21.

TV Coverage in Your Area: Click here for 506sports.com. You should be getting the game however.

This Week in the AFC North: Cleveland at Denver 820pm (SAT), Oakland at Cincinnati 1pm, Tampa Bay At Baltimore 1pm

What You Need to Know: Ben Roethlisberger is now 2-5 all-time against the Raiders… JuJu Smith-Schuster has gone over 100 yards receiving in seven of 13 games this season… The Steelers have lost five straight games to the Patriots dating back to 2011… During that stretch the Steelers are giving up an average of 34.6 points per game…

What’s at Stake: For New England, a victory can clinch yet another AFC East title but they also have to keep hope alive for home-field advantage. For the Steelers it is simple; the Ravens are likely to win at home over Tampa. A loss Sunday would drop the Steelers into second place and out of the playoffs.

Somebody Make a Damn Stand. At some point there has to be a player on this defense that says “enough is enough” and makes a play that turns the tide of the game. Physically I don’t know that this player exists especially against the Patriots but if this team is going to have any chance of wining Sunday then there have to be splash plays on defense. A sack, a fumble recovery an interception… Heck even a batted down ball on a crucial third down. The Steelers’ D has to be fed up with the constant criticism right? Somebody… Anybody… Make a damn play!

Special Teams Has to Be Special. When your defense isn’t able to turn over the opponent then your special teams’ units have to go above and beyond to turn the tide of the game. Danny Smith has to find ways to get Ryan Switzer more running room. He has to make sure the protections on punt and field goal teams are on notice. He also has to make sure his units can pull of the unexpected when necessary. To beat New England you must beat them in all three phases. When one phase is limited the others have to pick up the slack.

Ben Needs Help. I’ve seen a lot commentary this week that this game rests on the shoulders of Ben Roethlisberger especially with James Conner questionable at best. These are the same people who will now doubt vilify Big Ben if he turns it over while trying to extend plays. This is why I’m suggesting that he needs help Sunday. The screen game has to be better. It almost has to be an extension of a running play. It can’t be just Antonio Brown and JuJu Smith-Schuster either. Vance McDonald has to make plays and so too does James Washington and Jesse James. If Ben has to throw this ball 40-50 times as many expect he will then he needs guys he can depend on.

Prediction: I cannot recall a game with New England that garnered this little fanfare. The focus has been on Tomlin and on Keith Butler and on Chris Boswell and… you name it. Perhaps this actually helps the Steelers. Then again, who knows? With Tomlin and Butler making the decision to go with Artie Burns and Cam Sutton my confidence is not exactly high. The 2018 season really does rest on this game and after losing five straight to the Patriots why would my thinking change now? Patriots 31 Steelers 26 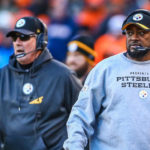 Steelers Preseason Week 1: What to Watch...