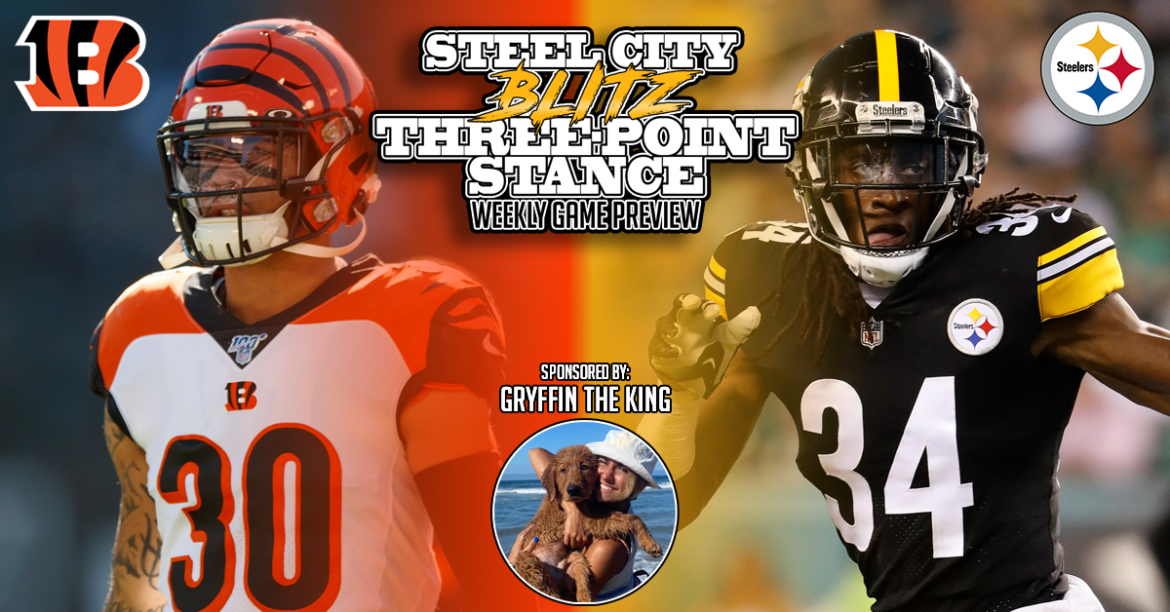 This is the Steel City Blitz Three-Point Stance. Your quick-hitting reference guide to everything you need to know about the Cincinnati Bengals and Pittsburgh Steelers in this week 10 matchup. The TPS is sponsored by Gryffin the King!

What: Cincinnati Bengals 2-5-1 at Pittsburgh Steelers 8-0

Weather: 59 degrees with wind and rain.

Last Week: Cincinnati enjoyed their BYE week while the Steelers rallied to defeat the Cowboys in Dallas 24-19.

Head Official: Adrian Hill. He’s in his second season as a Head Official. This is his second stop to the Steel City this year as he also officiated the Steelers’ win over Denver. There were 14 accepted penalties in the game including 10 against Pittsburgh. He also had the first matchup with the Bengals last season in Cincinnati where 17 penalties were accepted. 10 went against the Steelers.

What You Need to Know: The Steelers have at least one sack in 66 straight games. The record is 69… Four of the Steelers’ top six tacklers are from the secondary (Fitzpatrick, Edmunds, Haden and Hilton)… The Steelers have won 10 straight against the Bengals dating back to 2015… With 48 more completions Big Ben will pass Eli Manning for seventh most in NFL history… James Conner’s next 100-yard rushing game will be his tenth ranking him seventh all-time for the Black and Gold.

What’s at Stake: The Bengals aren’t a threat to make the postseason but their entire season could be made by knocking off the unbeaten Steelers in Pittsburgh. For the Black and Gold, it isn’t so much about remaining unbeaten as it is keeping that cushion in the AFC and AFC North.

Bring the Chaos. Rookie QBs have won their first starts in Heinz Field just twice since it opened. Granted, Joe Burrow is playing better than your average rookie but Keith Butler cannot afford to let him get comfortable. Last week, Butler was hesitant to bring the pressure against Garrett Gilbert in an effort to keep the Cowboys’ speedy receivers at bay. I think there’s not question that more pressure is coming Sunday and it has to be the chaotic type. Guys coming from everywhere and lining up all over the place has to be on the table.

Plugging the Run. I never thought I’d be so excited to see Tyson Alualu return to the lineup. Since he left, the Steelers’ run defense has been a shell of its former self. Guys are not getting off blocks and teams haven’t been forced to double-team as often and that has created more running lanes. Alualu’s return should help this significantly. Don’t underestimate however the loss of Mike Hilton who is 50/50 to play on Sunday. He is a terrific run stopper off the edge and the D has sorely missed that. With Joe Mixon doubtful, the Bengals will turn to other guys but they can’t be given success. It’s that simple.

Offensive Balance. It’s time to get this offense out of its’ current rut. The last two weeks has seen Ben Roethlisberger take over in the second half using largely a five-wide, no back formation. That’s all fine and good but at some point that will wear out its’ welcome. The offensive line needs a good day. It’s desperate for a good day actually because last Sunday was really below par. I’d like to see Benny Snell get some more carries and that’s definitely doable if the Steelers can get out to a lead. Regardless, Randy Ficthner needs to get this unit going!

BONUS: Clean up the Special Teams! The Three-Point Stance becomes the Four-Point Stance because Danny Smith’s unit was so damn bad last week I can’t ignore it. They gave up long returns. They had kicks blocked and kicks missed. And they didn’t even have the confidence of the head coach to kick a late field goal. Good teams are good in all three phases and the Steelers know they were fortunate last week. That luck will run out if things aren’t cleaned up.

Prediction: As ugly as things were at times, the Steelers still managed to win three, huge road games in three consecutive weeks. That’s not easily done in the NFL. Now they return home for a division foe coming off of a bye week. We must keep in mind that Big Ben, Vince Williams among others didn’t see the practice field this week due to Covid and that’s a factor. I tend to think the defense does enough and the offense takes advantage of a bad Bengals’ defense to get a key division win.