The Pittsburgh Steelers moved to 9-0 on the 2020 season with a 36-10 win over the Cincinnati Bengals. There was a lot to like yesterday wasn’t there? A big day from Big Ben… The big days for Diontae Johnson and Chase Claypool… And a pressurizing defense. But there are things to be addressed.

-The Steelers sacked Joe Burrow four times and hit him another nine. T.J. Watt had two sacks, Bud Dupree one and one from Robert Spillane.

-Remember the days when the Steelers could never seem to turnover other teams? Not a problem anymore. The Steelers ripped out two balls and recovered both.

-For not practicing this past week, Ben Roethlisberger was pretty decent. He was 27 of 46 for 333 yards and four touchdowns. Perhaps the most important thing was no turnovers.

-I have no clue how the Steelers will be able to keep JuJu Smith-Schuster next season but he really makes this receiving corps the most dynamic in the league. He does all of the little things and the big things when you need them.

-Really good game for Joe Haden who had three passes defensed. Does he give up a reception or two? Yup, but teams keep trying him and he answers the call.

-Ray Ray McCloud is something special isn’t he? Week in and week out he seems to make a play that makes a huge impact on the game.

-The Steelers have a three-game lead and the tie-breaker over both Baltimore and Cleveland right now in the AFC North. This is good news but as far as I’m concerned it doesn’t mean a damn thing yet.

-Does anyone run better routes than Diontae Johnson? Man is absolutely lethal out of breaks.

Ben on what makes the 9-0 #Steelers ‘special’ https://t.co/EHDzophZ2c #nfl

-I’m going to be blunt. If the Steelers can’t run the ball better they are winning a championship. It’s that simple. 44 yards on 20 carries isn’t going to cut it. To be fair in this particular case the Bengals loaded the box (I have no idea why) and forced Ben Roethlisberger to beat them which he did.

-The defense is still giving up big plays and that’s not good. As we prepare to play teams like Buffalo, Baltimore and Indy, we have to put a stop to those.

-Communication issues in the secondary were thought to be a thing of the past but they aren’t. Tee Higgins should have NEVER been that wide open on his 54-yard reception.

-Randy Fichtner has to come up with new ways of getting Chase Claypool going on the jet sweep. Teams know its coming and part of that is that it always seems to come from similar formations and in the same right to left direction.

-Pass deflections are happening too much at the line of scrimmage but it has nothing to do with Big Ben’s height. “He’s 6’5″! How does this keep happening!?!?!?” When you get rid of the ball as quickly as he does on so many plays, defensive linemen are taught to get their hands up if they can’t get to the QB. That’s exactly what is happening.

The Steelers travel to Jacksonville where they traditionally have not played well. The Jags have lost eight straight but will not be an easy out. They took Green Bay to the limit yesterday and they play hard. It won’t be easy. 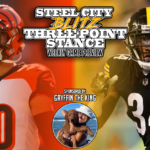