The Pittsburgh Steelers head into Cincinnati looking to stack another win on the pile against the Bengals. With nothing to lose, the Bengals are in a position hold nothing back in their attempts to keep the Steelers out of the playoffs.

Weather: High around 28 degrees with winds to 12 mph.

What You Need to Know: Since 2001, the Steelers have lost just three times in Cincinnati… Overall, the Steelers have won six of the last seven meetings against the Bengals… Ben Roethlisberger has thrown for over 5,800 yards against the Bengals… Last time he played them in Cincinnati, Le’Veon Bell went for 185 yards rushing and 50 yards receiving to go with three touchdowns.

What’s at Stake: In a word, Playoffs. Despite the Ravens losing last week, the Steelers still need to keep winning because they cannot assume the Ravens will lose this week or in week 17.

Bounce Back Ben. Can you imagine the reaction if the Steelers had lost last week with Ben Roethlisberger throwing three interceptions? It wouldn’t have been pretty. Even though the Steelers won, Big Ben’s woes on the road continued. I wish I had the explanation for this because defenses are essentially doing the same things against him at him and on the road. Whatever it is he has to get it solved.  The Bengals’ defense is banged up and this would be a good time for him to have a big game.

Heat on the Heatmiser. Bengals’ quarterback Andy Dalton has always reminded me of the character known as the ‘heatmiser’ who appeared in the movie “The Year Without a Santa Claus.” The red hair and red nose are just too similar… But there’s another reason for using the term ‘heat’ and it refers to getting pressure on Dalton. Over the last several games the Steelers’ Defense has been better than anyone when it comes to sacking the QB. That needs to continue. Dalton has typically been known to turn the ball over against the Steelers and some heat on him Sunday would keep that going.

Keep Your Head. Many coaches will flat out tell you that there are few games that scare them as much as those with an opponent with nothing to lose. The Bengals aren’t going to the playoffs and we know they have guys who would like nothing better than to keep the Steelers out. That means Vontaze Burfict will likely be doing everything he can to mess with the Steelers. In other words, the guys in the black and gold have to be smart and not get baited into his antics. Pittsburgh is playing well but they can’t afford the dumb penalties for retaliation. Stay composed and get the job done.

Prediction (8-5) Last week I clearly gave the Bills too much credit. I thought they’d play much harder push the Steelers to brink. I won’t make the same mistake this week but the Bengals aren’t themselves. They are without Giovanni Bernard and will likely be without A.J. Green. The Steelers can’t afford to relax though. Stay with Bell as option one and use the play-action off of him. I also think you’ll see plenty of Terrible Towels as well Heinz Field moves west. 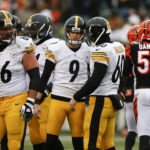