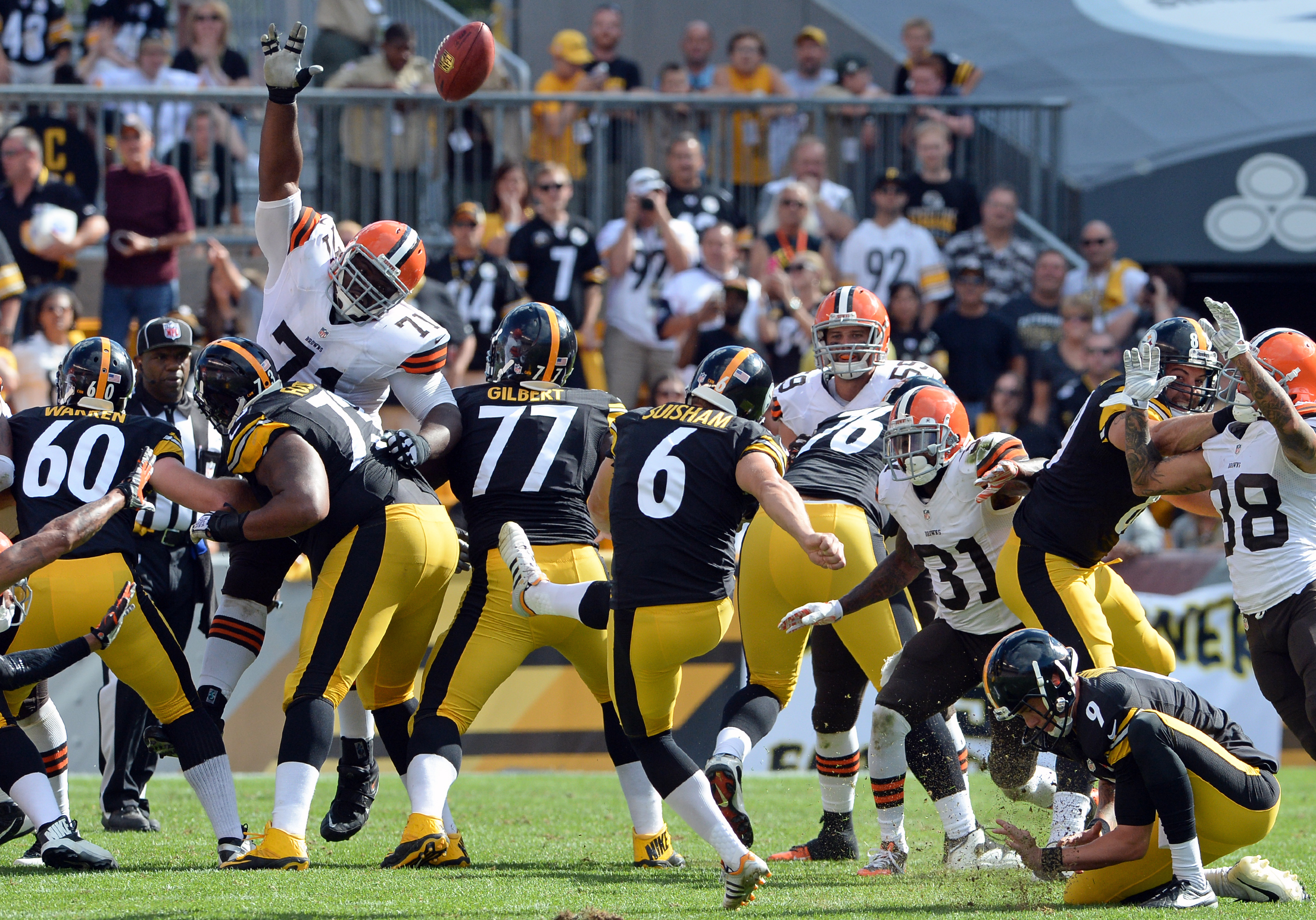 I did my best to tell you the Pittsburgh Steelers would not just roll over the Cleveland Browns and for one half I was as wrong as I could be. Then the second half started.

After building a 27-3 led at the half, the Steelers were miserable on offense and gashed on defense as the Browns rallied to tie the game only to see the Steelers behind Ben Roethlisberger and Markus Wheaton on the final drive save the day. Once in position, Shaun Suisham nailed a 41-yarder to win.

My Immediate Thoughts… In the NFL, you take every win you get no matter how ugly it may be and the Steelers will do that but there has to be some genuine concern in that locker room. Offensively, Todd Haley took the keys to the car away from Ben Roethlisberger in the second half while he tried to establish the run. Besides that, the offensive line struggled to protect Roethlisberger giving up four sacks.

Defensively, obviously the run defense is extremely scary right now. The Browns came into the second half with the hurry-up offense and used play-action which was working because the running attack was thriving. William Gay had several big passes defended and Troy Polamalu had 11 tackles. The secondary will be tested again on Thursday by Joe Flacco, Torrey Smith and Steve Smith in Baltimore.

-Both Shamarko Thomas (Achilles) and Dri Archer (ankle) were unable to continue playing today. Mike Tomlin said that both men were being evaluated.

-I’ve been harping on the lack of run defense with this team and they were gashed again to the tune of 183 yards on 30 carries. That’s an alarming six plus yards per carry. Most of it was in the second half. Browns’s rookie Terrence West rushed for 100 yards after he replaced the hurt Ben Tate.

-With 365 yards passing, this was the second time in his career that Ben Roethlisberger threw for over 300 yards in a season opener.

-Tomlin admitted that he called the fake punt which ultimately allowed the team to get the field position necessary to win the game. The real issue here is that Tomlin couldn’t trust his defense. How often does that happen in Pittsburgh?

-Le’Veon Bell clearly looked quicker as he’s twenty pounds lighter this year. He rushed for 109 yards and a touchdown and also had 88 yards receiving. The Steelers will be hard to beat if he does that every week.

-LeGarrette Blount’s first carry as a Steeler resulted in a touchdown.

-Brad Wing punted six times for an average of 43.7 yards and had two kicks inside the 20. That’s the type of punting he needs to do consistently.

-If Ike Taylor’s season last year was just an anomaly than his 2014 season isn’t starting off much better. He was penalized twice, victimized on a TD pass and dropped an interception.

Why the Steelers Miss the Playoffs for the Third Straight Year

Stopping Browns Backfield will be Key on...

It was definitely a tale of two halves yesterday. I can’t believe how much our team changed in just a short amount of time. As far as the offense goes, I know Haley wants to take the air out of the ball with a 24 point lead, but with that much time left the offense really needs to stay in attack mode. You have Ben who just set his own personal record with passing yards in the first half out there and you completely take the ball out of his hands. It just didn’t make any sense to me, and I’m sure I’m not alone. As hard as it might be to believe I think I was even more discouraged with the defense. The defense should not be giving up 183 rushing yards to anyone, especially the Browns. Whatever push the d-line was getting in the first have was just gone after halftime. Oh well, I don’t want to complain too much because they did get a win, but after seeing that second half performance I am worried about which Steeler team we are going to see this year.

I think this is exactly the year we are going to get with this team. Very up and down and inconsistent. Browns should have gone to the zone run/playaction stuff quicker. This team just can’t stop the run.

Were the players tired? Why did we wear our Black jerseys in September? Who makes those decisions. Home field advantage always meant having your team in light colored clothes and in the shade while putting the visiting team in dark colors and in the sun.

That’s always an interesting question. They haven’t worn white at home since 1969. I think it’s to the point where it “just wouldn’t be right” to wear anything but black at home. I agree with your point though. I do believe it makes a difference.

So after 1 game you all want to harp and complain. Fine by me if that’s the way you guys want to go after every game by all means go ahead (sarcastically speaking here). Yes the Run D had problems but as I said before this game it would take time for the D to gell but all of you guys want to abandon that immediately fine then I will do the same with Wheaton: Yeah he a good game but it was only 1 game and I don’t believe he really is the answer to play opposite of AB. I believe he can’t cut it with this team and will probably be replaced by either DHB, J.Brown or Martavis Bryant before the mid-season mark.

I think Wheaton clearly showed for one game at least that is more than capable of being the number two. Will that continue? I hope so but can’t say for sure.
As for the run defense. It’s bad. There’s no other way to say it and when you can’t stop the run you can’t stop anything and that’s exactly what happened in the second half. Cleveland stepped up the tempo, mixed the runs with play-action and boom! There you go. Worilds was atrocious against the run. Constantly coming too far up field or not containing properly.
Can they get better? Yes, but I don’t think it will be drastic.