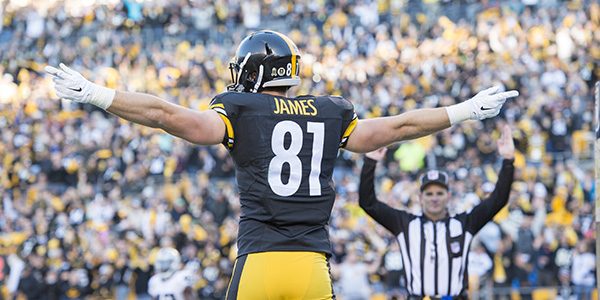 Today we shift our focus to the tight end position as our ‘Training Camp Battle Reports” moves on. If you missed our first installment for 2016, we covered the quarterbacks and more specifically, the battle for the number two post behind Ben Roethlisberger.

For the first time since 2005, the shouts of “Heeeeeeaaatttthhh!!!” will be absent from the Heinz Field stands. With Miller retiring, the Steelers went out and grabbed the highly athletic Ladarius Green from San Diego. Green is the clear number one and he brings size, speed and athleticism to the position. As great as Miller was, Green’s athleticism is in another stratosphere.

The major question for Green is his health. He didn’t participate in the OTAs this spring as he was recovering from offseason ankle surgery. What’s more troubling is that he may not be 100% ready to go for camp and that’s a problem. Coming into a new offensive system requires time to learn and when you can’t be on the field to work on what you’re learning then you get behind every, single day.

When Green is ready to go, he will become the main guy. Until then, second year tight end Jesse James will be given the opportunity to be the number two tight end. Also on the roster heading into camp are Matt Spaeth, Xavier Grimble, Paul Lang and the returning David Johnson.

Spaeth has been the primary back-up to Miller for some time now and he’s in the final year of a two-year deal. The Steelers have always loved Spaeth for his blocking ability and that’s the major area James will have to prove himself. If he can’t block consistently both in-line and on the move, then his number two spot is in jeopardy.

After a nightmarish start to his career, James came on and started to show more consistency. I think the potential is there for him to be a serious receiving threat in the red zone with the focus being on so more other guys.

David Johnson returns after being out of Pittsburgh the last couple of years. In conversations with SCB contributor Ben Anderson, he notes that Johnson is about 20-30 lbs lighter than the last time he was here. That signals to us he will be more of a back-up to fullback Roosevelt Nix than he will be at tight end, but his knowledge of the system will help him be able to do either should he need to do so.

Xavier Grimble is a guy the Steelers like based solely on potential. His collegiate career at USC was solid but probably could have used another year. He has a big frame and is the type of tight end who can catch balls over the middle in traffic and block well in-line.

Rookie tight end Paul Lang is a big drink of water out of Michigan State who was very under-utilized by the Spartans as a receiver but highly-valued as a blocker. His game needs development but he should get plenty of opportunities during the preseason to show what he can do.

Winners: Don’t be a bit surprised if Matt Spaeth is sent packing. James should be able to provide the blocking and he adds a better option as a pass-catcher too. In heavy sets, expect the Steelers to use an extra tackle to make up for any loss of beef. With Green and James entrenched, look for Johnson to make a push as he’s one of those veterans Tomlin likes.

[…] our ‘Training Camp Battle Report‘ on the tight ends that was published earlier today. There might be a surprise or […]