There’s no debating that the Steelers have one of the greatest fan bases of any professional sports’ team but even they aren’t immune from leaving seats empty or occupied by opposing fans in Heinz Field. During yesterday’s press conference, Head Coach Mike Tomlin pleaded with fans to be loud and make it difficult for Eli Manning to make changes at the line of scrimmage. Honestly? I never thought I’d see the day when a Steelers’ coach had to ask the fans to get loud at home.

Ben Roethlisberger and Ramon Foster both were on the air in Pittsburgh yesterday and and both mentioned that they had spoken with Antonio Brown about his celebration penalties. Most of us have no problem with celebrating, it’s getting the flags afterwards that is pissing the team off. I believe it’s time for Mike Tomlin to put his damn foot down.

‘Nail the Number’ for this week is out! It costs you nothing to participate!!

Don’t be surprised if the Steelers bring Demarcus Ayres to the active squad. Jim Wexell mentioned this yesterday and I’ve heard it from a couple of other sources as well. My assumption is that Darrius Heyward-Bey is not close to coming back. I’m not sure how much Ayres could contribute right now. It’s possible he could see some kick return action and fifth receiver duty but outside of that? I’m not sure.

Javon Hargrave, fresh off of two excellent games, had his hand heavily wrapped at practice on Monday but expects to play on Sunday.

Tweet of the Day… DWill with some important cleats. Guessing he’ll get fined but I’m OK with it as I’m sure he is too.

The Steelers’ offensive line, which has been really good the last two weeks, will get a solid test from the Giants. New York is sixth against the run this year so the treading my be tough for Le’Veon Bell this week.

Sounds like Shamarko Thomas is on schedule to return this week. Big deal right? Actually, with DHB out, Thomas’ presence on Special Teams becomes that much more important. As big a bust as he’s been on defense, Shamarko is an excellent special teamer.

Mike Tomlin says that James Harrison and Bud Dupree are locks for outside linebacker right now. He needs to see someone breakout among the group that includes Jarvis Jones, Anthony Chickillo and Arthur Moats tho because he doesn’t want anything to do with a five man rotation there. 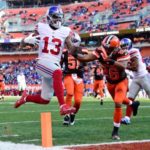