THIS WEEK ONLY! ENTRIES DUE ON Saturday AT 8PM EASTERN!!!!

The pot is growing…. We are now up to $2,100 as we head into week 12 of the NFL Season as our Steelers take on the New York Giants. Remember! All entries due by 8pm Eastern Saturday night.

-Winner will receive $2,100. If multiple winners in one week, the pot splits accordingly. If there is no winner the pot will increase by $100 per week until a winner. 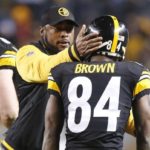 Brown Celebration Talk Can Be Shut Down By One Guy