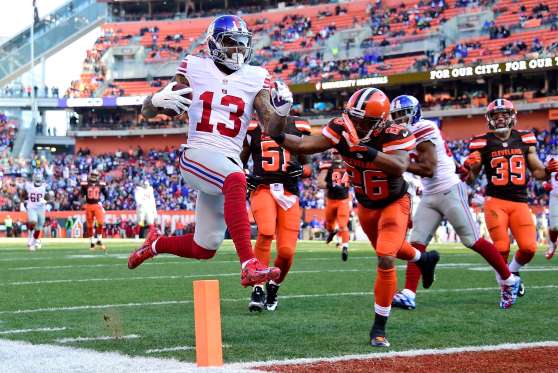 After two straight weeks of seeing less than stellar offenses, the Pittsburgh Steelers welcome the New York Giants to Heinz Field. While the G-Men don’t pose a major threat on the ground, their air power is something the Steelers must deal with cautiously.

How the Steelers’ Attack

The first thing the Steelers’ cannot do is overlook the run. Just because the Giants rarely do it and don’t do it well when they do, doesn’t mean you turn a blind eye to it. Shane Vereen could be back this week for New York and before he was dinged up by injuries he was averaging over four yards per carry. In his stead was Rashard Jennings who has averaged just 3.4 yards per carry.

John Mitchell has to preach to his guys on the defensive line to do their jobs and allow the linebackers to do theirs. It’s a recipe that has been successful the last two weeks and it should have built some confidence in both units.

The key to the defense’s success however on Sunday will be stopping the Giants’ passing attack. It will start with pressure and that won’t be easy. The Giants are the fourth-best team in the league at preventing sacks. They give up just 1.3 sacks per game so far in 2016 and some of that is good line play but my analysis suggests it has more to do with Eli Manning getting the ball out quickly. Winning on first down will be crucial for the Steelers. New York is 31st in the NFL in converting on third downs so the Steelers have to pounce on that.

Stephon Tuitt, Javon Hargrave and company will need to get their hands up and in the throwing lanes if they recognize they aren’t able to get to Manning. Because the Giants have surrendered few sacks doesn’t mean that Keith Butler should call off the dogs. Look for the zone blitz to come at times as it did last week but not to the number it came against Cleveland.

Butler will chose to keep plays in front of him and force the Giants into second and third and long situations. Artie Burns is getting better every week but Odell Beckham, Jr will be a significant step up for him in terms of competition. The one piece of good news is that he goes up against the best in the league every week in practice in Antonio Brown so Burns should be ready.

The back end of the defense will have to play well Sunday. Mike Mitchell and Sean Davis cannot afford missed tackles. Both are coming off very good games last week and Davis especially should have a confidence-burst that should carry over to Sunday. If they aren’t able to support the rest of the defense then it could be a long day.

The scenario is clear for the Steelers this weekend. Stop the run, keep the Giants in second and third and long situations and contain Beckham and rookie Sterling Shepard. Accomplish those goals and the D will be just fine. Of course some turnovers would help too…