I see it being discussed more and more and I’m going to put it to you today. What are you willing to sacrifice for the Steelers to play this year? Would you wear a mask in public if you don’t now? Would you tolerate there being “no fans” at stadiums in order for the games to be played? In other words, how important is it to you that the Pittsburgh Steelers play football in 2020? The NFL has told teams that everything is currently on schedule. All players will report to camp at the end of July and things will be evaluated daily from there. This is how the NFL operates so it’s not surprising to see full steam ahead. We cannot however ignore the elephant in the room. COVID-19 cases are exploding in places like California, Texas and Florida. These three states (and now Nevada) have nine of the league’s 32 teams. What on Earth happens if those states shut down? I don’t want to get ahead of myself though. The questions remain. What are you willing to do to make sure you have football this season?

Is Paxton in the Mix?

Coach Bobby has some thoughts on whether the Steelers’ QB situation is really as settled as we are led to believe. Paxton Lynch is a former first rounder with lots of raw ability. Could he unseat Duck Hodges?

Tweet of the Day… Who knew? Da Beard has become a bit of a photog!

We’ll be back with another episode this week but I wanted to share with you that we are a top 5 Steelers’ podcast. I don’t usually worry about these things as I’m not normally a fan of rankings period but I’m proud of what we’ve built from the ground up. You can check out the link here.

As I mentioned above, I hate rankings. They are subjective and are created for one reason; talking points. Earlier this week CBS Sports issued a list of top ten coaches in the NFL. Steelers’ Head Coach Mike Tomlin finished seventh. First of all, Tomlin’s postseason failures are undeniable and those right there are enough to knock him a few spots. But his regular season record and the fact he hasn’t had a losing season are also undeniable. People get way too worked up over this crap. It’s someone’s opinion and that’s it. 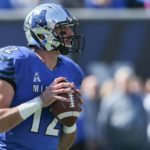