SCB Steelers’ Quick Hitters: The “When Does It Stop?” Edition

Good Friday to You Steelers’ Fans!

I guess I just have to accept that today’s media and sports media in particular is just this way. They take any soundbite no matter how minor and turn it into a front page story. The latest is none other Stephen A. Smith who is chastising Ben Roethlisberger for not calling Antonio Brown his true #1 wide receiver. Ben said earlier this week that he feels like he has many number one options. Nothing Roethlisberger said was a slight to Brown or anyone else whatsoever but Smith certainly wanted to make a federal case out of it. This is exactly why I spend so little time watching sports talk shows any more. It’s never about the games themselves, just about what someone said or did. I guess it will never stop though will it?

Part of this was also due to people suggesting that JuJu Smith-Schuster has replaced Brown as the “number one” wide receiver. Again, this is likely from people who really don’t understand the game. JuJu is taking advantage of the fact that he gets single coverage while AB is often doubled or more. Common sense dictates his numbers would be a bit better right now.

Tweet of the Day… Great stuff from Uncle Charlie.

What a great way to kick-off our annual toy drive. Thank you to everyone who stopped by to help fill our "bounce house present" on a below 30 day. Big shout out to Lindy Paving who rolled up with a trailer full of toys for our 150 families. Our journey to 6,000 toys has begun. pic.twitter.com/8Kl0imLCjd

Good news for Tuitt who practiced fully Thursday and today will determine his fate for Sunday… Bud Dupree appears to be much more up in the air right now which will really thin the OLB ranks… Marcus Gilbert looks to be out again but the good news is that Matt Feiler is good to go and Chuks Okorafor performed well last week.

With Melvin Gordon out, we’ll get a good look at Chargers’ newcomer Austin Ekeler. Haven’t heard of him? He’s a darn good running back and the type that could give the Steelers fits if they don’t tackle well.

Former Steelers’ Offensive Coordinator Ken Whisenhunt, who is currently the Chargers OC, will interview this weekend for the head coaching job at his alma mater Georgia Tech. Good luck to him!

SCB Steelers’ Quick Hitters: The “Being Too Honest” Edition 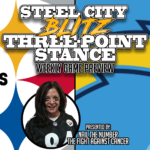