In case you missed this from last evening, Steelers’ linebacker Vince Williams decided to open himself up on Twitter in a very candid series of tweets about his feelings when the team drafted Ryan Shazier. The comments will no doubt take you a couple of minutes to sift through but they are worth it. Williams offers a rare look into the mind of these players who every single season know their careers are in jeopardy the moment the new season begins because of competition. Here’s the link to his timeline.

We recorded the Steel City Blitz Podcast presented by 26shirts.com/Pittsburgh last night and this is just part one of a two-show week for us. We spent last evening looking back at some of the guys who got a lot of playing time in the finale against Cleveland. Later this week we turn 100% of our attention to Jacksonville.

Tweet of the Day… What more could he have done to at least be considered?

Not being up for rookie of the year is just more fuel! Need to do more! That’s how I look at it ? pic.twitter.com/vdm90ZDvBu

If you find yourself constantly talking about how big the game with New England will be then may I ask you to stop? Jacksonville isn’t just going to come into Pittsburgh, see that it’s cold out and forfeit the game people. I expect a battle for four quarters so stop looking ahead to things that aren’t guaranteed!

Normally I wait until the “Three-Point Stance” to unveil keys to the game but this week the keys are pretty obvious. 1. Stop the run. 2. Run the ball. 3. Make Blake Bortles beat you. It’s really that simple.

Obviously those things don’t factor in turnovers and penalties and the like but you get the picture.

Speaking of penalties, Brad Allen will be the head official Sunday. His crew called fewer penalties than any other this year and his crew tended to favor the home team as well. Food for thought… 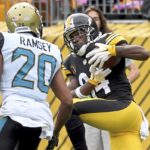