Over the last few years, Steelers’ General Manager Kevin Colbert has been willing to make a trade or two in the late summer. Whether for a defensive back or a kicker or a tight end, he’s been willing to pull the trigger. With Training Camp on the horizon, the crew here at SCB has been talking about the potential for trades. The difference is that this season Colbert could be looking to move his own guys. The easiest place to start is the secondary where there is an abundance of corners and safeties. While depth is important, there just aren’t enough places on the field for all of these guys. I’m not going to get into names because we have to see how Camp and the preseason shake out in terms of play and injuries. But I don’t think we should sleep on this simply because the Steelers will likely still be in the market for inside linebacker help too.

Stay up to date with Ian’s latest thoughts on the World Cup with his First Round breakdown.

A person dies and all of these “friends” pop up ?. I pray all these fakes don’t try and get clout off me like this when I kick it.

Le’Veon Bell told ESPN’s Jeremy Fowler that he doesn’t worry about his body breaking down. “I don’t really compare myself to a lot of other running backs — that’s no offense to any other running back, but just the fact that I can see and avoid hits,” Bell said, via Jeremy Fowler of ESPN.com. “It’s not like when I get the ball 30 times or 35 times and I’m really taking 30 car crashes. Either I’m delivering the blow or I’m getting to the ground. I’m sore after games, but it’s not like I’m aching. I don’t have to miss practices. I can go full speed and be good.” The only person that knows Bell’s body is Bell. If he’s still feeling pretty good (and not struggling to make it down the stairs as many backs have the day after games) then more power to him. The question is just whether he can maintain that for several more years.

Tim Benz of Trib-Live said that Rod Woodson had some comments about the Steelers’ secondary. Woodson basically is telling us what we’ve known since Troy Polamalu left; there are no playmakers in the secondary. He’s right. The D has to find guys who can step up and create more splash plays.

I really do love the optimism of Browns’ fans every year at this time. They have lots of young talent for sure but until that translates to victories I wouldn’t hold my breath.

Have you seen the World Cup commercial with American great Landon Donovan supporting Mexico? Can you imagine Jack Ham wearing a Ravens’ t-shirt supporting them in the Super Bowl? No. Freaking. Way. 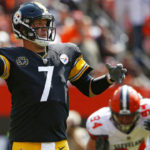