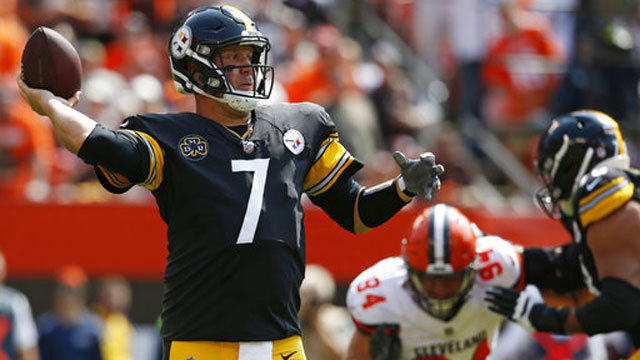 If you’re around long enough, you’re bound to find your way among the greats of the game you play. Ben Roethlisberger is in exactly that position as the 2018 NFL season approaches. While he probably needs to do no more to solidify his position as a future Hall of Fame player, rising a few spot on the respective ladders of quarterback greatness won’t hurt.

In terms of passing yards, Big Ben currently stands in eighth with 51,065 yards. He will pass his idol John Elway with just 410 more passing yards and then will be in a back and forth contest with fellow 2004 draftee Eli Manning who currently sits another 500 or so yards ahead of him. From there, the climb into the top five will be difficult. Dan Marino sits in fifth with 61,361 yards. Drew Brees should become the all-time leader at some point in 2018.

Roethlisberger is also in the top ten in all-time touchdown passes. He currently resides in ninth place with 329. He needs ten more to catch Eli Manning and 13 to pass Fran Tarkenton and Philip Rivers. Getting himself into the top five will not be easy. He needs 91 to catch Dan Marino who is currently fifth with 420 touchdown passes.

While Roethlisberger currently ranks ninth in passes completed, he’s just outside the top ten in passes attempted. At 6,493, he should be able to catch Vinny Testaverde (6,701) and Drew Bledsoe (7,717).

Passing yards per game is an interesting category. Roethlisberger currently ranks 12th with 255.3 yards per game but Peyton Manning and Kurt Warner are the only retired players ahead of him. Everyone else is currently active. That speaks to how much the game has changed even in his time in the NFL. Warner is five yards ahead of Big Ben but Rivers, Aaron Rodgers and Jameis Winston sit between the two of them.

There is no more important factor for Roethlisberger going forward than health. If he can play 15-16 games this season, then there’s no doubt he can keep climbing and should he play those 3 to 4 more years he’s talking about? The sky is the limit.

[…] Pretty incredible where Ben Roethlisberger ranks among the great QBs. As 2018 looms here’s a look at how far he can climb. […]