Steelers’ Head Coach Mike Tomlin held his weekly press conference yesterday. He made it very clear that Ben Roethlisberger, Antonio Brown and Le’Veon Bell would be rested on Sunday in the meaningless game against the Browns. With only a 53 man roster, Tomlin can’t give everyone a day off so sitting all of the starters isn’t going to happen.

We probably shouldn’t have been surprised to learn Ben Roethlisberger was having issues with his knee in the second half. He took a shot earlier in the game and took some time to shake it out. If you go back to that first play if he second half where he threw his second interception you can see the rust. He threw late, while fading back and off of his back foot. Thankfully he was able to get it loosened up but it’s yet another reason he could use the day off Sunday.

I thought Tomlin handled the question about Terry Bradshaw’s comments well. The “cheerleader” comment was disrespectful and I like the way he used some humor to deflect it.

Good observation by SCB contributor Brian. Antonio Brown played with a certain energy in that second half. He was going out of bounds as he often does and he fought (obviously) for every yard. That’s what making the postseason and beating your rival will do for you.

Tweet of the Day… Nothing to be said here.

I took Bradshaw to task for his comments yesterday but I think many of the younger Steelers’ fans need to know more about Bradshaw. I suggest they read some of his more recent books. The Hall of Fame QB opens up about his problems with anxiety and depression among other things. I’m not making excuses for his comments but someone’s knowing more about someone can help understand why they do what they do.

The injury report coming out later today should be interesting. We know Ladarius Green is still in concussion protocol and that tells me he won’t play Sunday. Stephon Tuitt is progressing positively but you likely won’t see him play either. The team actually came through the Ravens’ game in better shape than I would have expected.

Very sorry to hear that Carrie Fisher has passed away. A truly unique woman who I think changed the way women are perceived in action movies.

I poke a lot of fun at Rex Ryan who was fired yesterday in Buffalo but I have to admit it’s hard to expect a lot in just two years in one place. That said, he’s had six straight seasons now below .500. 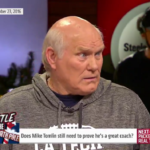