As most of you know by now, the Steelers’ will sit several players on Sunday including quarterback Ben Roethlisberger. That means his back-up, Landry Jones will get the start and Zach Mettenberger will be his back-up. While I understand some of the calls for Mettenberger to start (mainly because Jones is a free agent and unlikely to return in 2017), let’s leave this one to the coaching staff. Even though Big Ben, Antonio Brown and Le’Veon Bell will sit, that doesn’t mean you just throw a chance at winning out the window. There are a lot of guys who will battle hard on Sunday and they deserve the more competent quarterback. Play Jones and let the chips fall from there.

The amount of guys that didn’t practice Wednesday almost equaled the amount that did! Here’s the list courtesy steelers.com. Cleveland DNP is on the right.

There’s no question the penalty called on Ryan Shazier in the first half Sunday is still sticking in our craw. SCB contributor Ben wrote this piece on it earlier today.

Make sure you catch up with my Daily Steelers’ Update via bumpers.fm.

The key to success is small easily do-able goals that become habitual… Two sit-ups may not be 100, but it is better than none. #NewYear

I think it’s very feasible that James Harrison returns in 2017. Jarvis Jones will be gone. Arthur Moats has seen his snaps diminish to almost nothing and Anthony Chickillo is still very unproven. While I look for the Steelers to add an edge rusher either in free agency, the draft or both, I think there’s a place for Harrison who continues to play at a high level despite his age. He led the team in tackles on Sunday.

Talked to some fans in a store the other day. They asked me if I had ordered my “Hold Down the North” shirt yet. I politely said ‘no’ and here’s why. While winning the division is a huge deal, I’m waiting for bigger things. When the Super Bowl Champion shirts come out, you can bet I’ll order one. Don’t mean to be a prude, just how I see things. 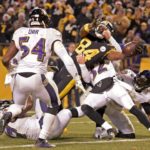