What a game. The Pittsburgh Steelers trailed 24-7. They had turned the ball over at the one yard line. And they still found a way to win. They defeated the Indianapolis Colts 28-24 and here are my thoughts on the good and bad of what transpired yesterday.

-Clearly Ben Roethlisberger isn’t done yet, not after that second half. Where that came from I’ll never know but he was tremendous. Just tremendous.

-Credit Diontae Johnson for bouncing back after a couple of tough weeks. He’s been much more consistent catching the ball and his TD reception was terrific.

-I’m not sure Mike Hilton will be back next year but he’s going to have made a lot of money for himself. He’s played well most of the season.

-Could we just give T.J. Watt the Defensive Player of the Year Award already? He recorded two sacks and a forced fumble that gifted the Steelers their first score of the game. Despite being doubled or chipped throughout he was constantly bringing pressure.

-I have to be fair to Avery Williamson who criticize a bit below. He had a monster game in the stats department. 14 tackles, two TFLs and a sack is a full day for any player.

-Credit to the offensive line for keeping Ben Roethlisberger clean in the second half. I’m not sure why the Colts didn’t bring more pressure but I’m sure they are regretting that today.

Tweet of the Day… Yeah I think this is true.

#Steelers need to find a way to keep Mike Hilton in 2021.

-There is no excuse, none, zip, zero, nada for Mike Tomlin NOT calling timeout at the end of the first half. The Colts faced a third and 18 in their own territory with :58 remaining and Tomlin allowed them to take it all the way down before finally using a TO on fourth down. This is a total failure of the simplest sort.

-If I’ve said this once I’ve said it a million times… I love Vince Williams. The guy is a true football player in every sense of the word but in coverage (and this goes for Avery Williamson too) he struggles. It’s that simple. Keith Butler has to know that opposing teams will be targeting them in the postseason.

-Does anyone whine more than Philip Rivers? Give it up already.

-Al Villanueva and Chuks Okorafor are not good at run blocking. There’s no other way to say it.

-20 yards rushing… for the GAME! Not acceptable.

-The officiating was questionable at times yesterday for both teams. I’ll leave it at that.

-There was a lot of talk about JuJu Smith-Schuster’s dancing in recent weeks but I want to highlight concerns away from him. Chase Claypool could have easily drawn a taunting penalty for his constant pointing at a Browns’ receiver late in the game. No need for that and you could see his teammates actually pulling away knowing he was crossing a line. Eric Ebron, following his touchdown reception decided to wave to the Colts’ bench. This is his most recent former team so he obviously feels bad blood there but come on. Knock that crap off.

-The Colts did the Steelers a huge favor by abandoning their running game in the second half. They had solid success against the Steelers in the first half rushing 19 times. They ran just nine times after halftime. That’s a really good Colts’ interior O-line but we have some things to clean up there.

The Steelers will take the bus to Cleveland (literally they will) with little to play for against the Browns. They have the head-to-head tiebreaker against the Colts and can clinch a playoff spot in Week 17 by beating the Steelers at home. They also can clinch if the Colts lose or via this combination: the Titans losing their final game and the Ravens, Colts and Dolphins all winning in Week 17 (scenario courtesy espn). I have to expect that Mike Tomlin will rest several players and with the practice squad rules such as they are I hope he takes advantage of it. As of right now, the Steelers would host the Browns in the first round of the postseason. 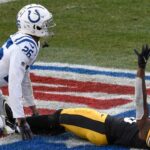 SCB Steelers Quick Hitters: The “To Sit or Not to Sit” Edition