Our Black and Gold will be well represented should we be forced to go to the 2018 NFL Pro Bowl. Eight Steelers were selected overall but there’s no question the biggest story is the omission of Cam Heyward. Even with 10 sacks on the season, Heyward was not selected and should he be asked to go in place of another player I’d strongly consider giving the NFL a big middle finger if I were him.

I cannot agree with the selection of Villanueva however. He is an American Hero and he’s an amazing story but he isn’t a Pro Bowl left tackle. Fans voted for him because of the anthem issue and the NFL will take every opportunity to take advantage of him being there.

Tweet of the Day… No argument from us Chris.

It’s an absolute travesty that @CamHeyward didn’t make this list. The #nfl got it wrong again. He was the most dominate DL in the league all season. #coldhardfact https://t.co/eDWEBAjJvt

The Steelers signed running back Stevan Ridley yesterday to shore up the running back position with James Conner going to Injured Reserve. The hope here is that Ridley never sees the field.

Aditi Kinkgabwala of the NFL Network deserves credit. She is consistently the only media member at Mike Tomlin’s press conferences that asks relevant and pressing questions. Although she knows she won’t get the answers she (and we) deserve, I credit her for not backing down.

I’ve mentioned before in this space that I have no idea how Bob Labriola of steelers.com stays sane. Some of the questions he is asked are so ridiculous that I can only imagine that they are jokes of some sort. Earlier this week he was asked if Jesse James shouldn’t cover Rob Gronkowski because he’s similar in size. I don’t have the words to try and explain why that is so stupid.

Have an outstanding day Steeler Nation! 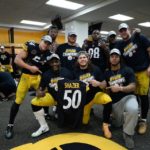