Many coaches live by the idea that win or lose, you think about it for 24 hours and then move on to the next opponent. That is often easier said than done and I believe that to be the case for our Steelers. Mike Tomlin and his team will say all of the right things but they cannot be blamed for wondering “what if.” Regardless, they must move past New England and focus on the task at hand. There is still the outside shot they could get help from Buffalo but there’s no guarantee. They must control what they can and hope that they get one more crack down the road.

Coach Tomlin will hold his weekly presser today at Noon Eastern. I will be very surprised if he takes any questions regarding the reversal of Jesse James’ touchdown.

Big talking point in the last 24 hours has been that no one else could hang with Rob Gronkowski so we shouldn’t be too hard on Sean Davis. My argument is that you can’t “do nothing.” Why did Keith Butler not try someone else? How about using a double team? Any thought to being more physical at the line of scrimmage? I get it, Gronk is difficult to defend but you can’t just let him abuse you without changing things up.

Tweet of the Day… This is really cool from AB. And from the crowd!

no player wants to leave the field with an injury but to receive this love and have the whole stadium behind me, what a blessing ?? thank you pic.twitter.com/zziKz2ScLJ

If you still have questions about what the Steelers were doing or SHOULD have been doing over the last minute of the game then check out Ian’s piece here. It’s spot on.

I’m not a fan of franchising Le’Veon Bell at the 14-15 million he’ll likely get next season should they do so, but how do we deny that he isn’t worth the money? There is no other back in the league as dynamic. I think the decision of Ben Roethlisberger will weigh heavily on what the Steelers do with Bell.

The Carolina Panthers’ Thomas Davis has been suspended for his blind-side hit on the Packers’ Devontae Adams. While this is the type of hit the league needs to get rid of how is this worse than what Rob Gronkowski did in Buffalo? At the very least, what Davis did was during the course of play. Gronk’s play was pre-meditated and AFTER the whistle.

Speaking of the Panthers, I am hopeful that the NFL strongly consider an ownership group that does not consist of old, white men. The league needs younger owners who bring different perspectives.

James Conner is done for the regular season at least with a knee injury suffered Sunday. He could be back for the postseason but there are no guarantees yet. I would not be surprised if DeAngelo Williams got a call. He knows the offense and would be well-rested. 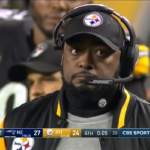